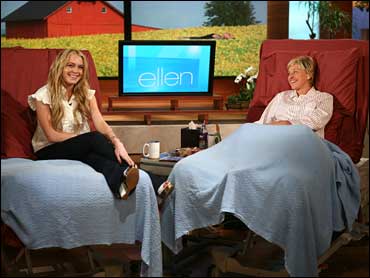 The "Georgia Rule" star said she's going to milk the milestone birthday for all it's worth.

"I'm going to milk it because it's a big birthday," she told DeGeneres. "I think it's been a long time coming for some of my friends that have clubs out in Los Angeles. They don't have to worry about getting into trouble because I'm underage. I think I'm doing a party in Vegas, which makes sense because I've never been able to go out there. I have never gambled there."

The pair were laid up in beds for the interview on the talk show because DeGeneres recently injured her back.

"But you just want to have a party in Vegas?" DeGeneres asked.

2Lohan has also made birthday dinner plans. "And, then I'm to have a dinner in Malibu. I don't know, I'm going to be with my family and friends," she said.

"It's a first for me in a while, too," DeGeneres said.