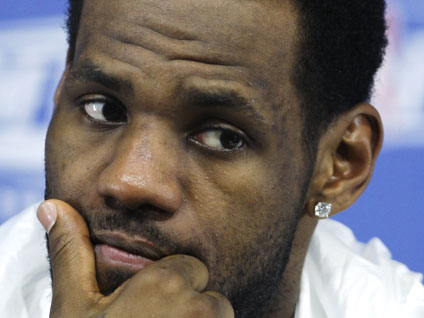 NEW YORK (CBS) Celebrities have taken to Twitter to express their thoughts on LeBron James' decision to play for the Miami Heat -- including the NBA player himself.

James is a recent arrival on the social media website, having just started his account this month. He already has more than 370,000 followers, tweeting as "KingJames." And after his ESPN announcement he messaged his followers: "What's up yall. Just landed in my new home. Thanks to all the fans and Miami organization who greeted me. The Road to History starts now!"

Actor Ashton Kutcher was one of several celebs to get their prediction of James's destination wrong. He wrote: "I say clevland....", later adding "I say Miami....." Adding, "Well you'll always [have] the browns. The cavs win 3 games next year. That was LeBrutal to watch."

Tennis star Andy Roddick was another star following the events closely. He wrote: "Lebron is working an awesome abe lincoln beard in this interview!!! tight!!!" Once discovering James going to Miami, tweeting: "HEAT!!!!!!!!!!!!!!!!!!!!!!" adding, "cue will smith 'welcome to miami.'"

Musician John Mayer opted to "re-tweet" a message from another Twitter user to reflect his thoughts on James heading to Miami: "Why is no one talking about absence of state income tax in FLA as a huge factor in LeBron James decision to go to the Heat?"

Comedian Michael Ian Black wrote a not-so-excited message on his account: "LeBron goes to Miami and a world thinks, 'That was anticlimactic.'"

Teen singing sensation Justin Bieber was also waiting eagerly for the news. He posted, and he was as surprised as his fellow celebs, commenting: "WOW LEBRON ...MIAMI??? how do we all feel about this...mixed emotions in this room."

He later added: "Ok. got to get focused on this show...congrats to the miami heat...KOBE WILL BE WAITING."