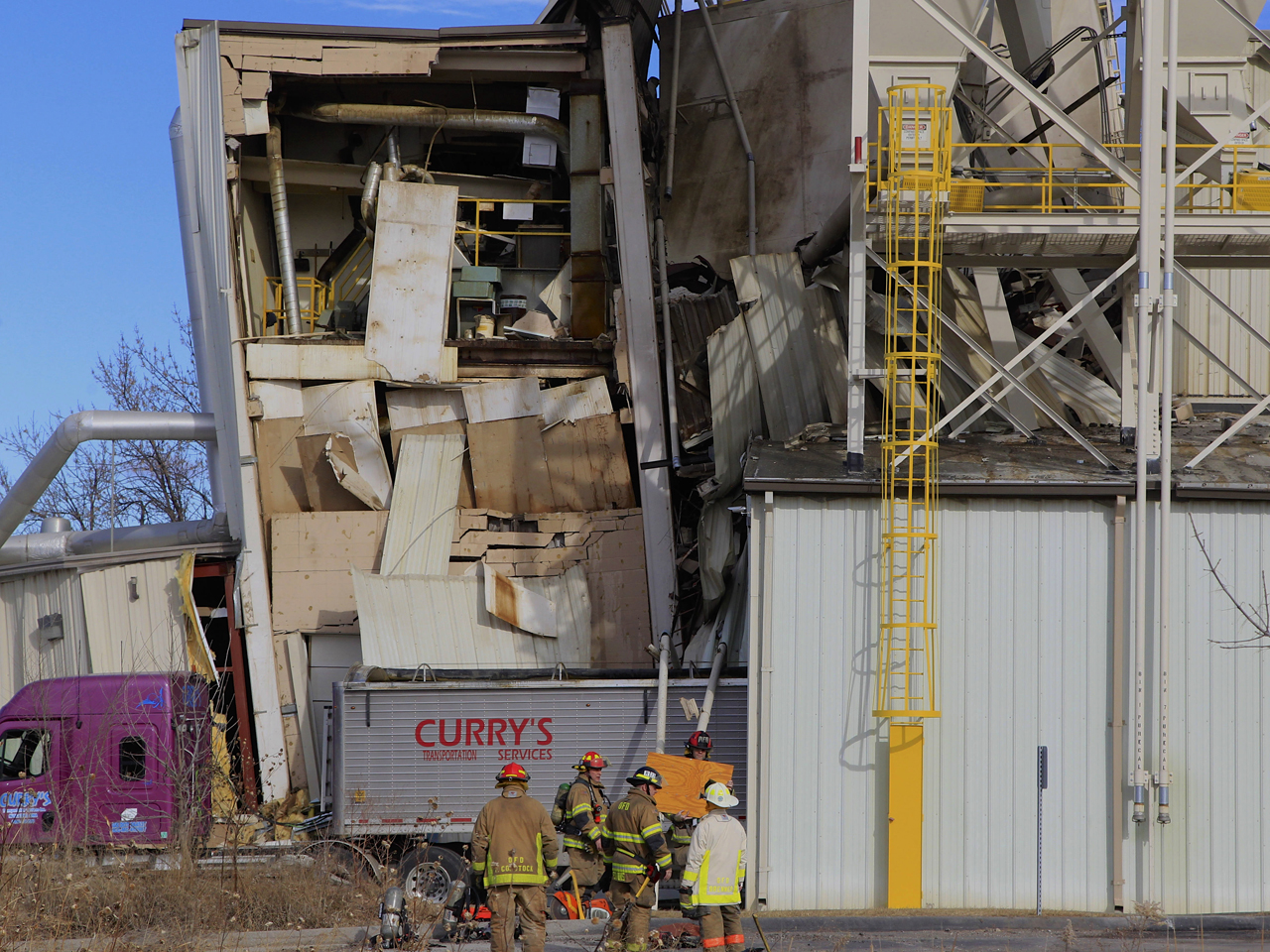 OMAHA, Neb. -- After a blast caused much of an Omaha manufacturing plant to collapse, some workers found themselves buried in debris and others scrambled for their lives.

Two of the 38 workers who were at the International Nutrition plant on Monday morning died and 10 were hospitalized with significant injuries, authorities said.

Jamar White was one of the more fortunate ones - he was outside watching trucks unload at the time. White said he heard a loud crack and looked up to see the back wall of the building collapsing.

"I ran at least 150 feet," White said. "I ran far enough to make sure nothing else would keep falling."

Key structural supports failed after the blast, and the second and third floors of the plant collapsed on top of the first floor. The blast knocked out the lights in the building and sent workers fleeing for safety.

Authorities don't know what caused the blast. Omaha Interim Fire Chief Bernie Kanger said at a news conference Monday night that he couldn't say for sure there was an explosion, though workers and other witnesses described hearing an explosion.

The Occupational Safety and Health Administration is tasked with determining the cause of the accident, but Kanger said the investigation could take weeks. He also noted there were no hazardous chemicals at the International Nutrition plant, which makes products that are added to livestock and poultry feed to make them more nutritious.

Kanger said firefighters were able to rescue five men initially, including one who had to be cut out of the debris. And search-and-rescue experts worked into Monday evening to stabilize the building and remove the body of one victim, 53-year-old Keith Everett, of Omaha.

But the combination of strong winds, cold temperatures and the dangerous rubble forced rescuers to suspend operations before the second victim could be recovered, Kanger said. That person's name hasn't been released.

"We've got tens of thousands of pounds of concrete, reinforced concrete and steel," Kanger said, noting the search effort and investigation will resume Tuesday morning. "This is a very significant rescue operation."

“(Tuesday's) effort is going to be labor intensive and time consuming just because of the structural elements that have failed,” CBS Omaha affiliate KMTV quoted him as saying.

“The damage to the inside of the structure would be considered tremendous. It was a catastrophic failure of some structural components which is why we have to make sure there’s enough structural support for those elements,” said Assistant Chief Shane Hunter, according to KMTV.

The accident was especially troubling for workers and their families because International Nutrition is a small company where most workers know each other.

White's wife, Sarah White, said she was at home with her four children when her husband called after the explosion.

"I could hear the panic in his voice," she said.

She spent the morning waiting with several other workers' families for updates on their loved ones.

"All of the people who are hurt are people he works with every day," she said. " … He's OK, but it's still emotional, because I know I could be one of those families crying."

Worker Nate Lewis said he was on the first floor when he heard the explosion. The building went dark, so the 21-year-old used light from his cellphone to make his way across the production floor and outside.

"I was a production line worker, although I don't know if I want to be that anymore," said Lewis, who's been at the plant for about four months.