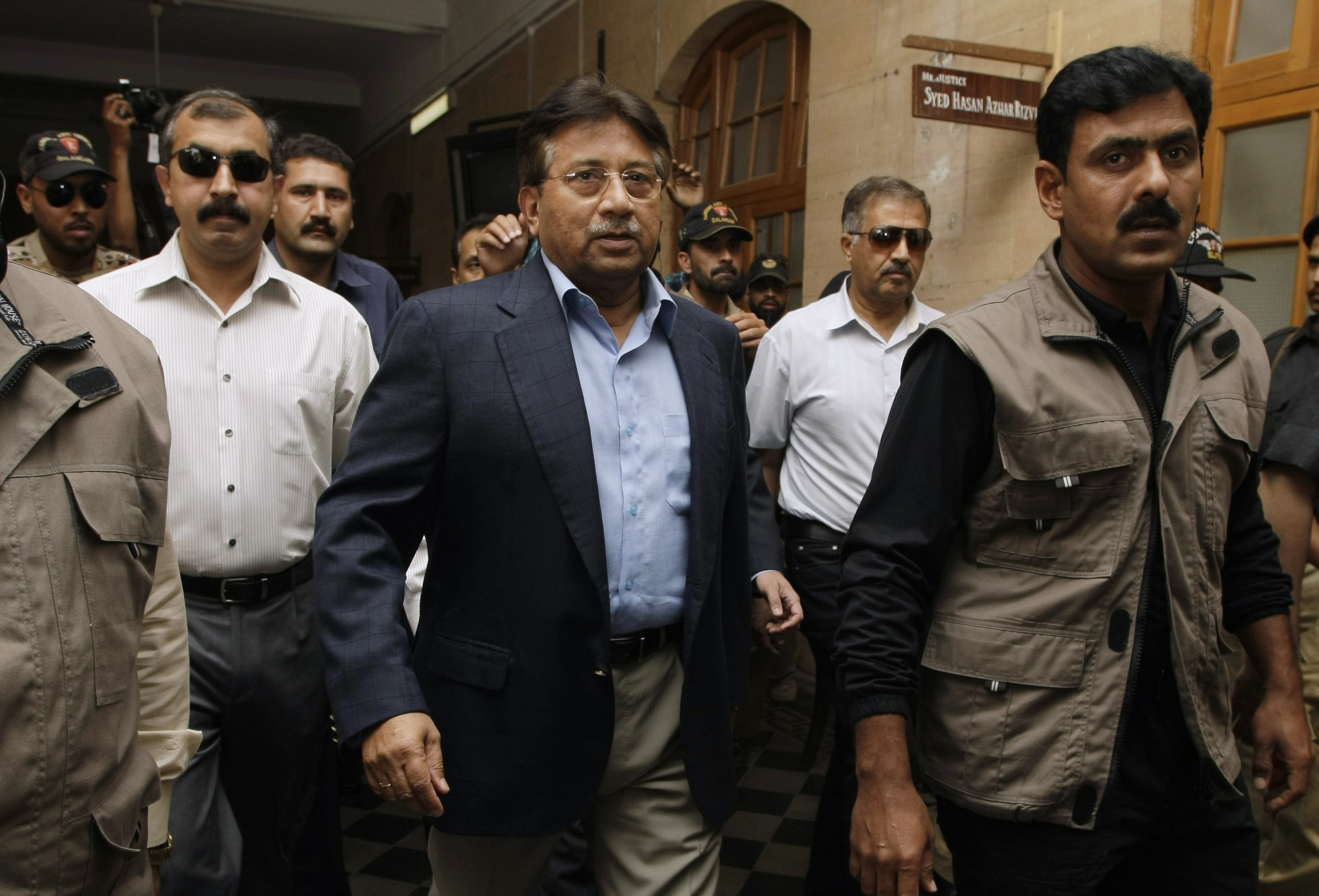 KARACHI, Pakistan An angry lawyer threw a shoe at former President Pervez Musharraf as he headed to court in southern Pakistan on Friday to face legal charges following his return to the country after four years in self-imposed exile, police said.

Meanwhile, a Taliban suicide bomber on a bicycle attacked the convoy of a paramilitary police commander in northwestern Pakistan, killing 11 people, including a four month-old infant, police said.

Musharraf, who seized power in a military coup in 1999 but was forced to step down nearly a decade later, is disliked by many lawyers throughout Pakistan because of his decision to suspend the chief justice of the Supreme Court while he was in office.

The lawyer tossed his shoe at Musharraf as the former military strongman was walking down a hallway in the court building in the city of Karachi surrounded by a mob of security, supporters and journalists, said police official Nasir Aftab.

The shoe did not hit Musharraf, and the lawyer was not detained because no charges were filed against him, said Aftab.

Throwing a shoe at someone is an especially potent insult in Muslim countries because the sole is considered unclean.

Local TV channels showed video of the incident, but it was impossible to identify the shoe thrower because he was hidden behind part of the corridor.

Following the incident, judges granted Musharraf an extension of pre-emptive bail in three cases against him, meaning he cannot be immediately arrested.

Two of the cases involve the 2007 assassination of former Prime Minister Benazir Bhutto and the killing of Akbar Bugti, a Baluch nationalist leader who died in August 2006 after a standoff with the Pakistani military. Musharraf was granted an extension of 21 days in those two cases.

He was granted a 15-day extension in connection with a third case, in which he is accused of illegally removing a number of judges at the time, including the Supreme Court chief justice, said Shahadat Awan, the prosecutor general for surrounding Sindh province.

Musharraf was also restricted from leaving the country during the period that his bail was extended, Pakistani state TV reported.

Musharraf returned from exile last Sunday, seeking a possible political comeback despite the legal charges against him and death threats from Taliban militants. But he was only met by a couple thousand reporters when his flight from Dubai landed in Karachi, and analysts have said they don't expect his party to attract much support in parliamentary elections scheduled for May 11.

Musharraf seized power in 1999 when he was serving as Pakistan's army chief. He was forced to step down in 2008 and eventually left the country amid discontent with his rule and threats of impeachment by the country's main political parties. His decision to suspend the Supreme Court chief justice, Iftikhar Chaudhry, played a key role in reducing his popularity. Chaudhry has since been reinstated.

In Karachi, a group of lawyers protested outside the Sindh High Court on Friday as Musharraf entered. They chanted slogans against the former military strongman and jostled with his supporters.

The attack on the paramilitary police commander's convoy in northwestern Pakistan occurred in the city of Peshawar. The apparent target, Abdul Majeed Marwat, who heads the Frontier Constabulary, was not hurt, said police official Dost Mohammed Khan.

The 11 dead included five members of the security forces and six civilians, said Khan. The civilians included two women, a young girl and a four month-old infant. Another 22 people were wounded, said Khan.

The Pakistani Taliban claimed responsibility for the attack. The group's spokesman, Ahsanullah Ahsan, told The Associated Press that they carried out the bombing because the paramilitary police "are part of a system we don't recognize, and second, they are operating against us."

Peshawar is located on the border with Pakistan's semiautonomous tribal region, the main sanctuary for Taliban militants in the country. The Pakistani Taliban have carried out many bombings in the city and other parts of the country targeting both security forces and civilians.

There is concern that the militants could step up the pace of attacks ahead of the upcoming parliamentary elections.