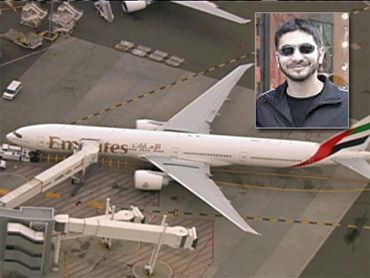 Updated at 2:40 p.m. ET with a quote from Police Commissioner Raymond Kelly.

Authorities are touting the fact that they managed to arrest terrorist Faisal Shahzad in a mere 53 hours after discovering the bomb-laden car he left in Times Square in New York, but some are questioning how Shahzad managed to get as far in his attempted escape out of the United States as he did.

Shahzad was on board an Emirates Airline flight to Dubai when authorities detained him.

"Clearly the guy was on the plane and shouldn't have been," New York City Mayor Michael Bloomberg said in a press conference yesterday.

"A key question for me is why this suspect was allowed to board the plane in the first place," she said. "There appears to be a troubling gap between the time they had his name and the time he got on the plane."

Significant lapses in security by the government and the airline allowed for Shahzad to board the flight, the Times reports, citing unnamed officials. Attorney General Eric Holder yesterday denied that there was a chance he could have gotten away.

"I was never in any fear that we were in danger of losing him," he said.

However, Shahzad was put on the no-fly list on Monday morning but still managed to buy a one-way ticket with cash, obtain a boarding pass and get through security.

"It does beg the question why he wasn't apprehended before arriving at the airport or boarding the plane," one unnamed government official told the Washington Post.

Authorities may have been trying to balance two priorities, Michael McCann, former chief of U.N. Security, said on "The Early Show."

"The people that are conducting the surveillance, they have to make a decision early on, what is our primary goal," he said. "Are we gong to apprehend him... or are we going to conduct surveillance?"

New York City Police Commissioner Raymond Kelly said today it is not unusual for a suspect to be lost during surveillance.

"You're following someone in narcotics cases or gun cases or any case, it happens, you know, you'd prefer that it doesn't happen," he said, following a Homeland Security Committee hearing in Washington.

Former federal agent Joseph King, a professor at John Jay College of Criminal Justice in New York who specializes in terrorism and homeland security, theorized that investigators may have purposefully let Shahzad on the plane, the Christian Science Monitor reports. He said letting Shahzad get on the plane -- once authorities knew he would not be a threat to other passengers -- could have helped the investigation.

"You grab his bags on the tarmac side," he said. "Then, once he's on the plane you watch for any indication of anyone connected to him, perhaps making eye contact or winking."