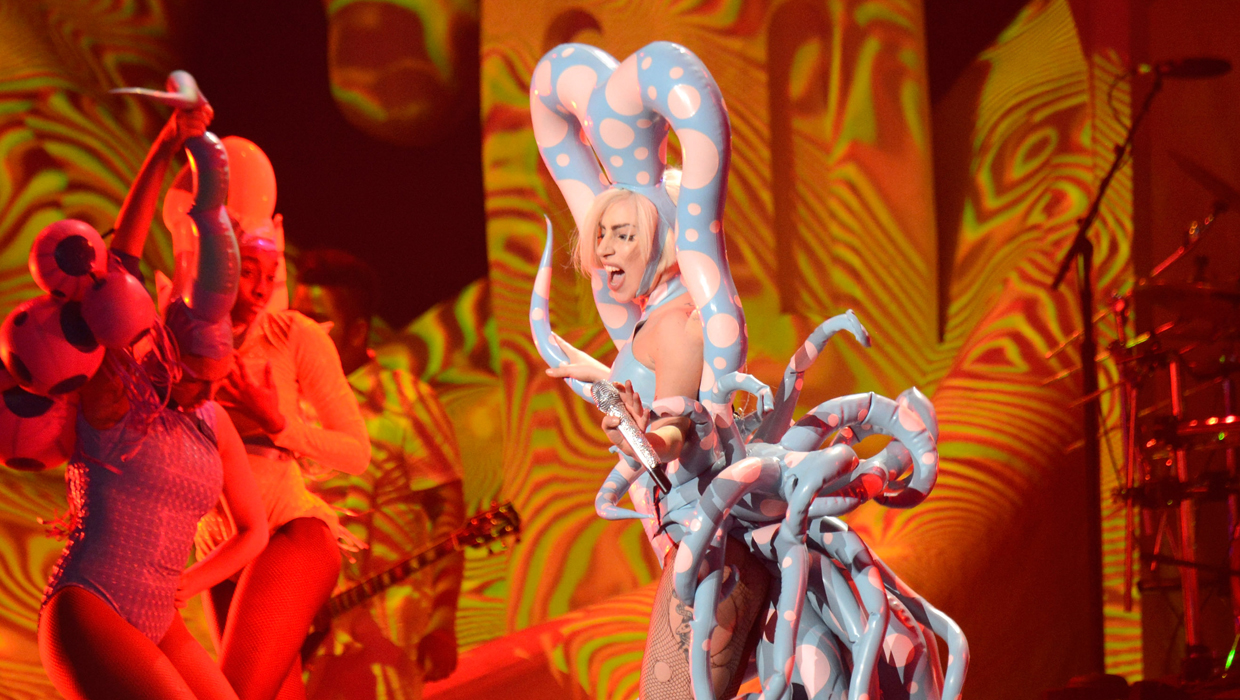 She sure seemed right at home, too. The pop star, who was forced canceled a series of shows last year due to a hip injury, was in full-force during the confetti-filled and energy-driven h0metown concert.

"I'm Dorothy of Emerald City...There's no place like home," she said in a reference to the "Wizard of Oz." Mentions of her New York City and her many friends in the audience (Lady Starlight, Dirty Pearls and more) were made throughout the night as were uplifting words of wisdom for her Little Monsters.

"You can be whatever you want tonight," Gaga said during the New York stop of her "artRAVE: The ARTPOP Ball" tour.

The 28-year-old pop star changed her clothes live onstage, danced around 12-foot space plants, created her own little planet of sorts ("the mothership," as she described it) and even called up surprise guest -- rapper T.I. -- during the nearly two-hour performance.

She emerged from below the stage before kicking off the evening's first song, "ARTPOP" and managed to get through the majority of tracks from her latest album, "ARTPOP."

The "oldies" weren't forgotten, however -- as Gaga did a mash-up of her hits "Just Dance," "Poker Face" and "Telephone," along with full versions of "Bad Romance" and "Alejandro."

While at the piano, she slowed things down for a stripped-down version of "Born This Way," really showing off her vocal chops. Before the song, she told the crowd, "My life mission [is] to make records that always were me, will always be me and always represent to you in that beautiful, perfect, honest and authentic way. Thank you for letting me be myself."

Costume changes were aplenty -- from sparkly onesies to bejeweled wings and creature-like accessories. In between all the glitz, Gaga read a couple of heartwarming letters from adoring fans in the audience, a few of whom she invited backstage after the gig.

The stage setup allowed Gaga to get up close and personal with fans, including a couple of lucky ones who got a chance to sit at the Absolut ARTPOP Lounge, an onstage bar created to be part of the theatrical set that offered up signature cocktails such as the "Absolut Monster."

That setup is all part of a world tour that kicked off in Fort Lauderdale, Fla., on May 4 and will continue this year with dates across North America, Asia, Australia and Europe. So, there are many shows in the singer's future, and by the sound of it, Gaga will continue her mission of inspiration at every stop.