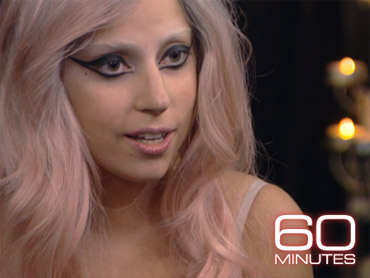 Even if you've never heard her music, chances are you've heard about Lady Gaga. She is the most talked about entertainer in the world.

In the past two years, she has had six number-one hit songs, and on Sunday at the Grammy's she is not only a headline performer, she has also been nominated for six awards.

Her fans are devoted to her, and millions more seem mystified by her. Is she a real artist or a marketing expert? Is she musically gifted or a flash in the pan?

We weren't sure what to expect when we caught up with her in the final months of her sold-out European tour.

Each time we met her she surprised us - not just with her candor, and her frank talk about drugs may concern some parents, but she also surprised us by never appearing the same way twice.

Lady Gaga: Behind the "60 Minutes" Interview
Veteran producer John Hamlin followed Lady Gaga from London to Milan to New York. Hear the stories from the road, get a tour of Gaga's dressing room, and see the pop star's emotional moment we saved from the cutting room floor.

A Tale of 3 Divas
What did Lady Gaga, Madonna, and Barbra Streisand all do behind the scenes on their "60 Minutes" shoots?

Gaga: My Bravery Is In My Wigs
CNN's Anderson Cooper sits down with "60 Minutes Overtime" editor Ann Silvio to share more revealing moments from his series of in-depth interviews with Lady Gaga.

So how does one address her?

When asked if anyone calls her Stefani, Lady Gaga said, "Yeah, some people do. Especially in bed…I prefer Stefani in bed."

"No. That would freak me out," she replied.

When we first met Lady Gaga in London, we had planned a quiet stroll along the River Thames. But when she arrived, about a dozen paparazzi were following her.

When Cooper asked if she ever gets used to the paparazzi, she said, "No."

Make no mistake: Lady Gaga uses the photographers as much as they use her. Her over-the-top outfits are designed to grab headlines and get people talking.

"Everywhere you go, are you always in full regalia?" Cooper asked.

"Full regalia. That's a fabulous word! Can I steal that from you?" she replied, as she walked in 10-11 inch platform shoes.

To get away from the paparazzi, she took us to the outskirts of London to a small pub for a drink.

"Do you take days off? Or do you feel like you're in this whirlwind and you have to keep it going?" Cooper asked.

To understand how Lady Gaga got so famous, you have to start with her music.

She's been on tour for much of the past three years. A tireless performer, in concert she is constantly on the move, singing, dancing and changing costumes.

Her biggest hits are dance songs and some of the imagery may seem reminiscent of Madonna. But Lady Gaga is more outrageous.

She has studied the artistry of others but is a creation all her own, a classically trained pianist who writes or co-writes all her songs.

She insists she never lip synchs, and alone onstage, her voice packs a powerful punch.

It's not just the music her fans respond to however: it's also her message, an uplifting mantra of self-empowerment and self acceptance.

"Tonight I want you to let go of all of your insecurities. I want you to reject anyone or anything that ever made you feel that you don't belong. Free yourself of these things tonight! Yeah!!!" she encouraged her fans at one show.

"You're hoping to speak to people who feel different, who feel disconnected?" Cooper asked.

She sees herself in her fans. She calls them "Little monsters" and they are devoted to her.

Two months after seeing her in London, we met up with Lady Gaga in Milan. She had transformed herself once again - new hair, new makeup, and hardly any clothes.

"What are you wearing today?" Cooper asked.

"I just didn't wanna wear clothes today. For whatever reason I just didn't. I actually don't even have any foundation on my face. I just wanted eyeliner and my McQueen boots," she told Cooper.

Lady Gaga doesn't consider herself just a pop singer. She sees herself as a performance artist - a living work of art onstage and off. The clothes and wigs are all part of the production.

"I'm a true academic when it comes to music and when it comes to my style, my fashion. There's nothing that I've ever put on my body that I didn't understand where it came from, the reference of it, who inspired it. There's always some sort of a story or a concept that I'm telling," she explained.

The concepts are not always obvious to most people. Last year she wore an outfit made of raw meat to an award show, accompanied by several discharged gay service members. She says it was a commentary on "Don't ask, don't tell."

Spending time with Lady Gaga, we realized the outfits and transformations are not just attention getting, they're also attention directing - a way for her to keep the public focused on her work, as opposed to her personal life.

"You've studied the fame of other people, how they got it, how they kept it and how they lost it," Cooper remarked.

"The sociology of fame and how to maintain a certain privacy without, feeling like you're withholding anything from your fans. My philosophy is that if I am open with them about everything, and yet I art direct every moment of my life, I can maintain a sort of privacy in a way. I maintain a certain soulfulness that I have yet to give," Lady Gaga said.

The pressures of maintaining fame and the deadly price other superstars have paid for it are frequent themes in Lady Gaga's performances. At the MTV Video Music Awards she shocked the audience by the ending of her song "Paparazzi." Drenched in blood and hanging above the stage, she resembled a blond icon dying before our eyes.

"Do you think people wanna see your decay?" Cooper asked.

"And then climb their way back," Cooper remarked.

"Right. It's a movie. And yet I just am not like that on my own time. I'm not a vomit-in-the-club kind of girl," she said.

Just five or six years ago however, she could have become that kind of girl. She says she was using a lot of cocaine.

Her name was Stefani Germanotta then. She had dropped out of New York University, intent on becoming a star.

In January she took us back to the building in New York she lived in before hitting it big. She had transformed herself once again.

"We're gonna do it the New York way," Lady Gaga said, before hitting most of the buzzers to get into the building. "Someone'll listen."

She wanted to show us her old studio apartment, but it turns out not everyone in New York is so enamored with fame: the current tenant didn't want her to come in with TV cameras rolling.

She grew up in a far more prosperous New York neighborhood with her parents and sister. She had started piano and dance lessons at age 4, and went to a Catholic girls school.

She was a good student, but says she didn't feel like she ever fit in.

"I felt disenfranchised by my school, and by the people in the school that would make fun of me and bully me and tease me and make me feel less cool," she said.

That feeling began to change. And her career took off after she adapted the name "Lady Gaga" from a Queen song, "Radio Gaga." The new name freed her she says to become the superstar she was meant to be.

"I was able to leave such a massive amount of insecurities behind me by getting rid of that name in a way," she explained. "And I still am very insecure in so many ways. But I wish I could give that gift to all my fans.

"You have the freedom to pull the superstar out of yourself that you were born to be. We are all born superstars," she added.

Lady Gaga says she no longer uses cocaine, though she readily admits she still smokes pot. "I smoke a lot of pot when I write music. So I'm not gonna sugarcoat it for '60 Minutes' that I'm some, like, sober human being 'cause I'm not. I…drink a lot of whiskey and I smoke weed when I write. And I don't do it a lot because it's not good for my voice," she said.

"I don't wanna encourage kids to do drugs. But when you asked me about the sociology of fame and what artists do wrong, what artists do wrong is they lie. And I don't lie. I'm not a liar. I built good will with my fans. They know who I am. And I'm just like them in so many ways," she said.

Her new album is coming out in May, and "Forbes" magazine estimates she is on track to earn as much as $100 million this year.

The new album's content is guarded like gold. A leak of a song can cost a record company millions.

She let us listen to a half dozen of the new songs, but would only allow us to record a few seconds of the title song, called "Born This Way."

"You know when people heard I did this interview everybody asked me the same question, 'What is she really like?'" Cooper said.

"Photographers say this to me all the…'I want to photograph the real you.' I'm, like, 'What the hell are you looking for? I'm right here. You've seen me with no makeup. You've asked me about my drug history, my parents, my bank account.' I mean, how much more real could I be?" she replied.

"People obviously think that you're not being who you are because you are, wearing a lot of makeup and always, you know, presenting yourself in a different way," Cooper said.

"You have a sense of humor about yourself. Do you think sometimes people take take you too seriously? There was that rumor that… sorry. Do you have the diamond in your mouth now?" Cooper asked, after she emptied the cup in one go.

"Uh-huh," she replied laughing. "Yes, people take me both way too seriously and not seriously enough."

In the end, what Lady Gaga says she cares about most is her music. The clothes and the costumes, even the controversies, are all just a part of her artistry, part of the performance her life has become.

Mastering the art of fame is one thing - maintaining that fame is another. The music is what Lady Gaga believes will allow her to do just that.