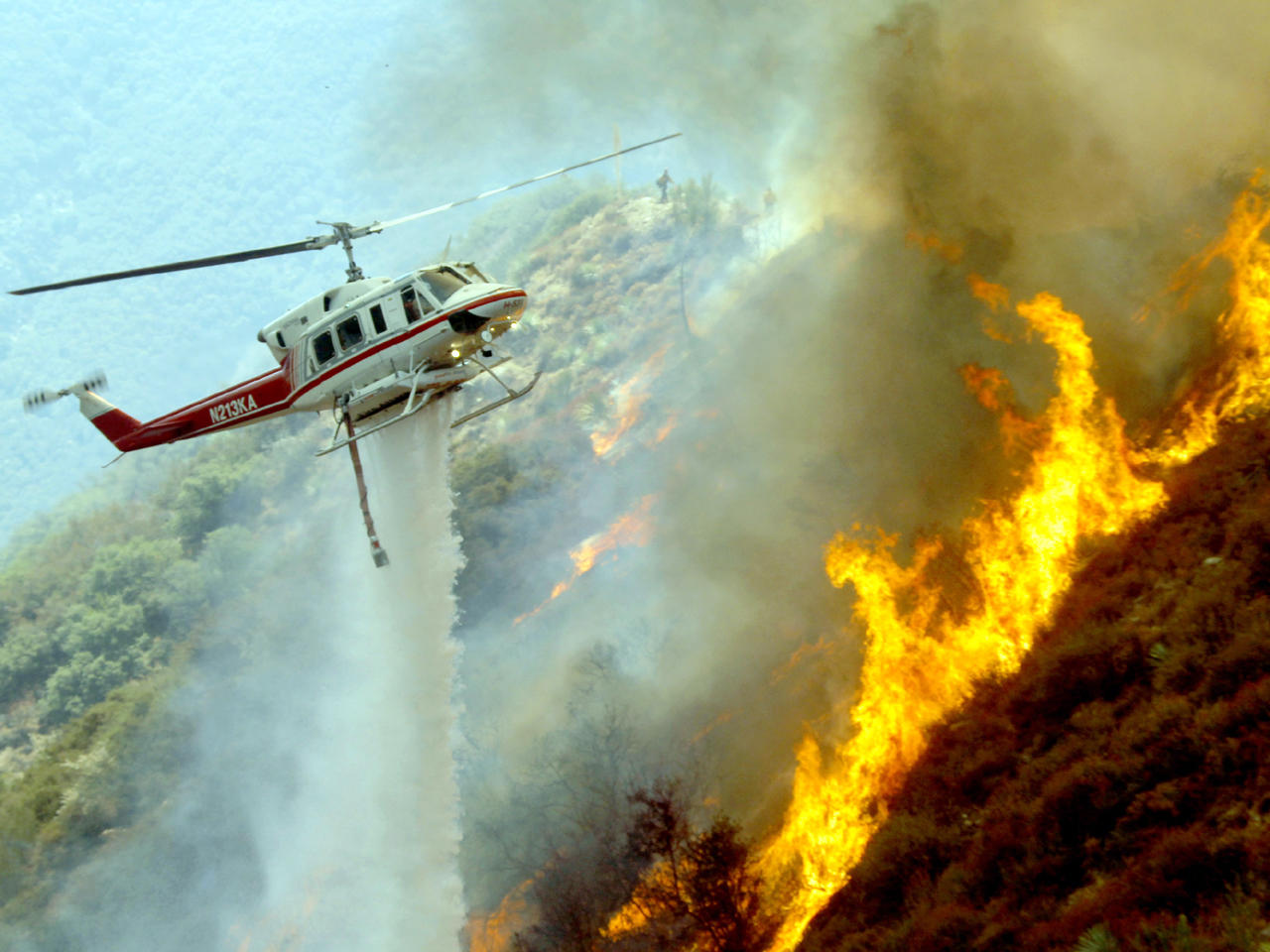 Without winds like the notorious Santa Anas, the fire burning in the Angeles National Forest made no move Tuesday toward Los Angeles suburbs at the southern foot of the mountain range and was remaining in the wilderness.

The fire was chewing through thick brush that hasn't burned in two decades on slopes so sheer some are at 80-degree angles, said incident commander James Smith of the California Department of Forestry and Fire Protection. Because of the terrain and warm temperatures, it could take a week to contain the blaze, he said.

Very dry conditions, with humidity below 10 percent were forecast for the area all week and temperatures were expected to remain in the 80s and 90s, said National Weather Service meteorologist Mike Wofford.

Firefighters said the blaze, which has burned about 5-1/2 square miles, was 24 percent contained. No structures had been lost, though eight minor firefighter injuries were reported.

An estimated 800 firefighters were continuing to clear new fire lines and hold existing ones in hopes of expanding containment of the blaze, according to CBS station KCBS in Los Angeles.

The fire was also being battled from the air, with 11 tankers and 10 helicopters, KCBS says.

The serious fire season in Southern California usually begins with the arrival of the Santa Ana winds, which peak in November and December. The Santa Anas are often linked to the most destructive wildfires, blowing out of the northeast and down through mountain canyons and passes, driving any flames down into foothill suburbs.

Jet Propulsion Laboratory climatologist William Patzert said the winds were the only thing absent from the current fire situation, because all the other major factors, including drought and dense population, already exist.

Southern California's population in 1950 was 4 million people, Patzert said, but today it is pushing 20 million and many people are living in areas that historically were considered fire corridors, he said.

"The history of Southern California has been written in fires and other calamities. I think the population density and where we build and how we build has made it more frequent, more costly and more precarious," he said.

The only thing you need to go with winds, overpopulation and a dry fuel load is ignition, Patzert said. Ninety percent of fires are human-caused, either intentional or accidental, he said.

"With 20 million people in Southern California, there are always plenty of candidates. We seem to have our unfair share of wacko pyromaniacs," he said.

Brush clearance is one of the few things homeowners can do to help protect their homes, Patzert said. "It stands head and shoulders over everything else. You need a defensible area in a fire zone. It should be mandatory."

On the San Gabriel Mountains fire front, a burned car was found in the area, but it was unknown if the car caused the fire or was destroyed by it.

The blaze in popular San Gabriel Canyon brought an early halt to Labor Day weekend hiking and camping plans for as many as 12,000 people. But 25 residents of the small community of Camp Williams refused to leave.

Kevin Brown, a gold prospector and Hollywood lighting technician who lives in Camp Williams with the other holdouts, said he was scared when a sheriff's deputy knocked on his door Sunday afternoon.

Brown asked him what was wrong and the deputy pointed to smoke up the hill. But Brown looked at a weather report and decided to ignore the evacuations orders. The fire burned closest to the mobile homes and campsites late Monday night, he said.

"It was burning down this whole ridge line and hill. It came all the way down to the fire line where the firemen were trying to keep it from crossing the road," he said.

"I sat up for hours in my picnic chair and my video camera just taping different sections of the fire raging. It was crazy, I had this whole fireworks show to myself in the middle of the night."

In Northern California, several new fires broke out Tuesday, including one in Colusa County north of Sacramento that was sparked in late afternoon and by nightfall had surged to 1,000 acres and forced the closure of Highway 16. A smaller, 200-acre spot fire broke out about three miles away.

In Mendocino County, a weeks-old fire was 62 percent contained after scorching more than 65 square miles.