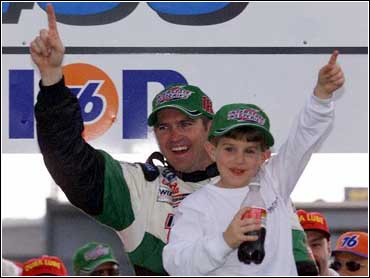 During the brief winter lull between Winston Cup seasons, Bobby Labonte was nervous about maintaining his team's momentum.

He didn't have to worry.

Labonte, the series runner-up, finished 1999 with 10 straight finishes of eighth or better, including a victory in the final race in Atlanta. That all added up to big championship hopes in 2000.

Now, after the first two races of the season, Labonte finds himself in a familiar position, running second to 1999 champion Dale Jarrett in the standings, although he trails by just five points.

"To win this early is exciting," said Labonte, who started the season with a sixth-place finish in the Daytona 500, despite some problems in the pits. "I'm not going to sleep tonight, to be honest with you."

Labonte said he knows people will start asking him about a possible championship now, but he said, "I'm not even thinking about that. All I'm worried about is today. Tomorrow, we'll worry about tomorrow."

On Sunday, his No. 18 Joe Gibbs Racing Pontiac was overpowering, helping General Motors turn the table on Ford.

Labonte hung with the leaders throughout the 393-lap race and finally began to show his power when he took the lead on lap 242.

Pontiacs and Chevrolets swept the top four positions just a week after the top Ford Tauruses caused an uproar about a supposed aerodynamic advantage by taking the first five spots in Daytona.

As dull as the race was in Daytona, Sunday's show was exciting throughout, with 22 lead changes among 10 drivers and plenty of position changes all the way to the back of the pack.

With the final 196 laps on the 1.017-mile oval run without a caution flag, Labonte took control. He came out of the final round of pit stops by the leaders ahead just ahead of Earnhardt's Chevrolet and steadily pulled away.

By lap 364, Labonte's lead was more than six seconds. At that point, crowd favorite Earnhardt began to close in, chopping tenths of a second off on every lap.

It appeared for a while he would catch the leader, but Labonte was able to weave his way through heavy traffic, keeping Earnhardt's black No. 3 at bay.

The two leaders broke free of traffic four laps from the end, but it was too late. Earnhardt came across the finish line 1.068 seconds abut 10 car-lengths behind Labonte.

"He was coming on pretty strong at the end, but we had built enough cushion that we were able to hold him off," Labonte said. "I wouldn't have wanted that race to be much longer."

Earnhardt, who finished in the top five at Rockingham for the first time since he won this event in 1996, said the race came down to tire wear on the worn and abrasive asphalt track.

"A lot of other guys were taking off and burning up their tires early. I sort of saved my tires early in the runs," said the seven-time Winston Cup champion. "It was all tire management. I just needed a few more laps.

"But he got too far out front and we just couldn't get back to him."

Labonte credited his crew for getting the car up front with a lot of hard work.

"Jimmy can vouch that we worked really hard on the setup today," Labonte said. "This track is really temperamental. We were too loose, then too tight, and then we really got it freed up. But I don't know what perfect is here."

Labonte, who finished sixth in Daytona, behind defending series champion Dale Jarrett, moved to second in the standings. He's five points behind Jarrett, who finished a lap down in fifth on Sunday.

Gordon, who had won three of the last six races here, wound up 10th after making up two lost laps with the help of an early caution flag.

In all, there were four caution flags for a total of 21 laps. All but one of the 43 starters were running at the end. Rookie Jeff Fuller out after hitting the wall on lap 188.

The race was run without interruption from the weather. Rain, which had been forecast, began falling just 10 minutes after the checkered flag waved.