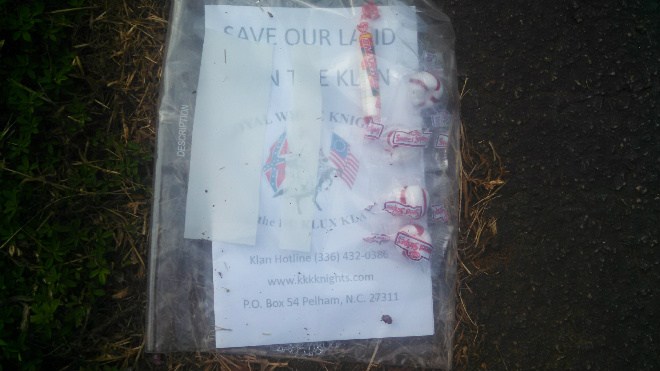 SENECA, S.C. -- Some residents in northwestern South Carolina say they found bags of candy on their street containing a piece of paper asking them to join the Ku Klux Klan.

CBS affiliate WSPA reports that the flyer says "Save Our Land, Join The Klan."

It has a phone number that led to an automated message discussing KKK efforts against illegal immigration. The station reported that the message also says "If it ain't white, it ain't right. White power."

Robert Jones told WHNS-TV that he's the imperial klaliff of the Loyal White Knights and said the effort was part of a recruiting event they hold three times a year.

Oconee County resident Bo Morris said he thought it was "unacceptable" to see the bags and fliers in his neighborhood.

Last year, sheriff's officials in the Atlanta area launched an investigation after fliers inviting residents to join the KKK were placed outside homes.