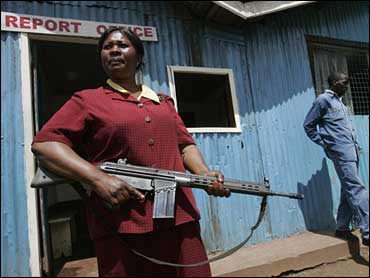 Former U.N. Secretary-General Kofi Annan is taking over mediation in a dispute over presidential elections that has left over 500 dead in Kenya, after his predecessor failed to get President Mwai Kibaki and his rival to even meet.

Diplomats have been stymied for days. But departing AU mediator John Kufuor, the president of Ghana, emphasized the positive in comments to reporters at the airport Thursday.

"Both sides agree that there should be an end to violence," said Kufuor, current chairman of the African Union.

The AU statement said Kufuor had won an agreement from Kibaki and opposition leader Raila Odinga to work with a panel of eminent Africans led by Annan to resolve their differences over Dec. 27 elections that the opposition accuses Kibaki of stealing. International observers agree the vote was rigged, and even Kibaki's own election chief has said he can't be sure who won.

Allies of Kibaki were sworn in as Cabinet ministers on Thursday, further dampening hopes for a power-sharing compromise. Odinga has said he would meet Kibaki only in the presence of an international mediator. Kibaki wants direct talks.

Earlier, protesters from the women's wing of Odinga's party marched in protest chanting "No peace, no justice! Kibaki is a thief," Police fired tear gas at them, noting a ban on all demonstrations since the violence erupted.

"We are calling for truth about what happened to our votes and the votes of Kenyans," said the chairman of the party's women's league, Jacqueline Oduol.

Kenyans for Peace with Truth and Justice, an umbrella for civil groups formed after the elections, presented police on Thursday with a long list of alleged charges against electoral commissioners and some staff, including forgery, subverting the rule of law, making out false certificates and abuse of office.

The civic groups called for the prosecution of all 22 members of the Electoral Commission and some commission staff, including vote counters.

"The electoral process is so seriously flawed that, until that is redressed, and until we have truth and justice about the election, we are not going to have a viable society in Kenya," said Shailja Patel of the Kenyans for Peace, which includes the Kenyan National Commission on Human Rights, which while state-funded has proven in the past to be independent and is highly respected, and the Law Society of Kenya.

While multiparty politics is only 15 years old in Kenya, the country's democracy has been bolstered by a lively and independent media and increasingly vigorous civil society. Thursday's move by Kenyans for Peace is a reminder to the politicians that voters will hold them accountable.

But Kibaki said in a speech Wednesday he considered questions about the vote and the count closed.

The vote "is finished, and anybody who thinks they can turn it around should know that it's not possible and it will never be possible," Kibaki said, adding complaints should be taken to the courts, which he has stacked with his allies during his five years in power.

The crisis has brought chaos to what has been one of Africa's most stable democracies in a region rent by civil war and conflict and a prized ally in the U.S. war on terror.

The European Union and the United States have been pressing for Kibaki and Odinga to meet and added to the pressure in what Odinga's spokesman, Salim Lone, said was a "tense meeting" Thursday with U.S. envoy Jendayi Frazer, Kufuor, four former African heads of state and the ambassadors from the United States, Britain and France.

After Kibaki met with Kufuor Wednesday, the government released a statement saying Kibaki "assured President Kufuor that he had already initiated a process of dialogue with other Kenyan leaders."

In another statement Wednesday, Kibaki said he was "committed to dialogue with all parties" and indicated there still was room for Odinga's party in his Cabinet. In filling half the Cabinet seats on Tuesday, however, he gave none to Odinga's party, even though the two sides were expected to discuss power sharing.

Odinga's party spokesman, Lone, has called the Cabinet announcement "a slap in the face" intended to undermine AU-mediated talks.

Odinga's party - the Orange Democratic Movement, or ODM - won 95 parliament seats and Kibaki's party 43 in legislative elections held the same day as the presidential vote, meaning it would be difficult for Kibaki to govern without making some overture to Odinga.

© MVIII The Associated Press. All Rights Reserved. This material may not be published, broadcast, rewritten, or redistributed