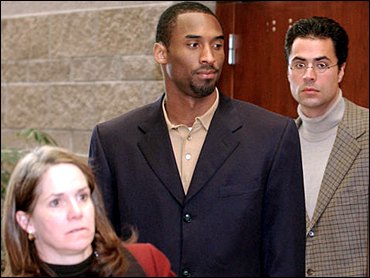 Attorneys for basketball star Kobe Bryant suggested in open court Friday he may have been falsely accused of rape because he is black.

The comment from attorney Pamela Mackey came during a legal squabble over the notes of a rape crisis center worker who sat in on a police interview with Bryant's 19-year-old accuser. The defense wants access to the notes, a request opposed by the crisis center.

Inga Causey, attorney for the Resource Center of Eagle County, said releasing more details about Bryant's accuser would lead to fewer women reporting rapes. She said rape reports dropped in Florida after William Kennedy Smith was acquitted, a case in which his accuser's medical background was targeted by defense attorneys.

At that point, Mackey urged the judge to focus on the Bryant case and avoid the "political agenda of the rape crisis center."

"There is lots of history about black men being falsely accused of this crime by white women," Mackey said. "I don't think we want to get dragged down into this history any more than we want to get into the history brought up by the rape crisis center."

It was the first time defense attorneys suggested in open court that race was a possible motive for the accusations of the woman herself. Until now, they have said only that she had a "scheme" to falsely accuse Bryant in hopes of winning attention from an ex-boyfriend.

"If you're already biased toward believing something, how can you continue then to do an impartial investigation?" says legal expert Karen Steinhauser.

Mackey did not discuss the race issue further. State District Judge Terry Ruckriegle said he will decide later whether to hold a full hearing on turning the notes over to the defense.

Also Friday, an Iowa man pleaded guilty to leaving a profanity-laced death threat on the accuser's answering machine last July. John Roche, 22, pleaded guilty in U.S. District Court in Denver to making a threatening telephone call across state lines. He faces a sentence ranging from probation to five years in prison and a $250,000 fine at sentencing June 4.

Bryant, 25, faces four years to life in prison or 20 years to life on probation if convicted of felony sexual assault. He has said he had consensual sex with the employee of a mountain resort where he was a guest last June.

Denver attorney Craig Silverman, a former prosecutor, said it was inevitable that race would become a point of argument in the case.

The defense "will give the jury a smorgasbord of reasons why the rape allegation was false," Silverman said. "They're giving jurors a hook to hang their reasonable-doubt hat on."

The defense has dropped other bombshells at pretrial hearings. Mackey drew a warning from the bench for repeatedly mentioning the accuser's name in open court, and she has said the woman may have had sex with multiple partners before and even after her encounter with Bryant.

The top issue at Friday's hearing was expected to be whether the accuser surrendered her medical privacy rights by discussing her medical history with others, including her mother and police. The defense has suggested the woman took anti-psychotic medication and twice tried to commit suicide in the months before her encounter with Bryant.

The medical privacy arguments, however, will be held behind closed doors: Ruckriegle ruled the evidence is too sensitive and potentially humiliating to the accuser to allow the public and the media to hear it.

The defense must win this fight to be able to present the woman's medical history at trial, either through information from her records or through testimony of friends and relatives.

A Feb. 2-3 hearing will determine whether the medical history is actually relevant and should be admitted at trial.

Eagle attorney David Lugert, a former prosecutor, said there is no set standard on waiving privilege and that decisions are made on a case-by-case basis.

The judge could bar defense access to the medical records, but allow testimony from her friends and family, Lugert said.