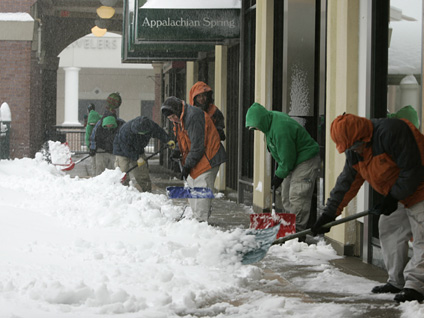 Knitting was once an activity that grandmothers did when they got together and complained about how infrequently their grandkids called them. In recent years, there's been an explosion in knitting's popularity. Now, it's not uncommon for granddaughters to feel they're too busy knitting to call their grandmothers. Younger women have taken up the craft, and so have high school and college students. But one group that's knitting and purling away the evening hours is somewhat of a surprise: adult men.

What's your stereotypical view of what it's like when a bunch of men get together? Are they watching sports? Talking about sex? Eating hot dogs and drinking beer? Scratching themselves? Burping and not saying, "Excuse me?" Well, if you add to that image a bunch of guys knitting potholders, you'll get what's going on today.

Once a week, a knitting shop in New York's Greenwich Village has a Men's Only night. There, the guys can exchange knitting tips — while they eat hot dogs and drink beer. Similar places are springing up all over the country and throughout the world. Women are going to have to get used to hearing things like, "I might be home late. I'm going out knitting with the guys."

Foolish people will probably debate whether knitting is a "manly" activity. Even those traditionalists would have to admit that snowboarding isn't wimpy. Well, snowboarders are among the males who have started to knit. They want to make their own winter gear, both as a way of saving money and as a fashion statement.

Men probably knit for the same reasons that women do: Some find it relaxing, some want to express themselves creatively, some want to make their own clothes, and some want to be able to say, "I can't answer that phone. My hands are full."

When I was a little kid who couldn't sit still, my grandmother taught me how to knit. She figured that if I'd sit and knit, she wouldn't have to chase me around her apartment. It worked. She never bothered showing me how to end a project or do anything fancier than knit, knit, knit, but that was enough for me. I'd end up with these long pieces that I'm sure she either threw away or ripped apart as soon as I went home to my parents, but she'd end up with a head that didn't ache.

Most historians believe that knitting began with men. It grew out of knitting fishing nets. After that came socks, and then sweaters that cost more than what those fishing boats used to cost.

In this day and age, when people can do things previously only done by the opposite gender, it's only natural that men have taken up needles and yarn. And these men don't necessarily fall into any stereotype. One wife reports that her husband loves to knit, but also fishes and hunts. He's probably fun to shop with before vacations: "I'll take that shotgun, that reel — and that really cool pattern book to go with this yarn."

The web site, MenKnit.net has a motto, "Man Enough To Knit, Strong Enough to Purl." Some super-macho knitters probably will carry this one step further and have the slogan tattooed on their hairy chests. I just hope they use something safer than a knitting needle to do the tattooing.

I can see a time when inmates in maximum-security prisons will give up weightlifting and scowling for crocheting and knitting. CAVEAT TO WARDENS AND GUARDS: Make sure they aren't knitting extra long scarves to swing themselves over the walls.

So, just as I see as positive the opening up of occupations and sports to women that were historically dominated by men, I see no reason why men should not be allowed to work with needles and balls of yarn just as women have done for years. In fact, not all knitting sessions have to be for just one sex. Men have been known to take women to a knitting class on a first date. This, of course, brings up a new social etiquette question, "Do you kiss after the first knit — or wait until after he takes you purling?"