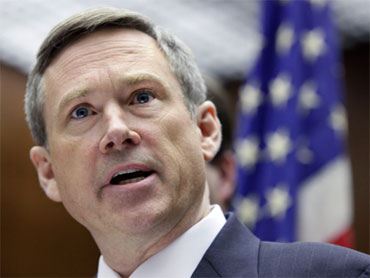 "I apologize to everyone for these errors," the Illinois Republican said. "They were my responsibility entirely and I will fix them."

The five-time U.S. representative, who is competing with Democrat Alexi Giannoulias for the Senate seat once held by President Barack Obama, also acknowledged new incidents where public statements didn't match reality about his service.

Kirk said a letter sent by his congressional district office last year described him as a veteran of Operation Desert Storm, the first Persian Gulf war, but he did not participate in that operation.

Kirk later flew over Iraq for intelligence reconnaissance missions in 2000. He said Thursday he does not recall coming under enemy fire on those flights and added it was sometimes hard to tell whether his plane was being targeted.

But C-SPAN video shows Kirk on the House floor saying he was fired upon.

"The last time I was in Iraq I was in uniform flying at 20,000 feet, and the Iraqi air defense network was shooting at us," Kirk said in the undated video, which was posted online by the Giannoulias campaign.

Kirk also said last year that he once saw anti-aircraft flack when flying an intelligence mission over Kosovo and thought he might be killed.

The Kirk campaign did not respond Thursday night to requests for clarification on those incidents.

The furor over Kirk's military record took off last week when he acknowledged that, contrary to his many statements over the years, he hadn't won the Navy's award for intelligence officer of the year.

Amid media inquiries to the Navy, Kirk corrected his resume to show he actually received a different award, one that went to his unit instead of him personally.

Kirk also has said that when he's on active duty, he commands the Pentagon war room, which is an exaggeration of his intelligence duties there. And until 2005 he sometimes said he served "in" Operation Iraqi Freedom, the 2003 invasion of Iraq, although his duties at the time were entirely stateside.

Politicians' military records are under particularly intense scrutiny after the recent revelation that a Senate candidate in Connecticut, Richard Blumenthal, had sometimes told audiences he served in the Vietnam War. Actually, he was in the Marine Reserves and never left the United States.

Kirk initially played down the significance of the incorrect information about his own record, and criticized Giannoulias for raising the issue. He accused Giannoulias, the Illinois treasurer, of denigrating his military service.

But as more errors come to light, Kirk is changing his tone. His campaign released his military fitness reports Thursday so the public can see what his commanding officers have said about his performance.

In them, he is portrayed in glowing terms for his work as an intelligence officer, including for stints in Italy and Turkey.

In one report, Kirk is praised for his "unmatched managerial and planning skills," while another recognizes his "phenomenal performance." Another says he's "head and shoulders above any other intelligence officer" the reviewer had ever met.

"I think going forward I have to be humble about my military record," Kirk said earlier Thursday. "I have to understate it and I have to own up to any errors that I created. I do not want to create the impression of adding to the record."