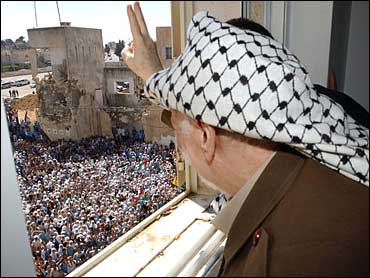 Israel's vice prime minister said killing Yasser Arafat is an option for Israel, as Palestinians on Sunday took to the streets across the West Bank and Gaza Strip promising to protect their leader.

Secretary of State Colin Powell warned Israel would incite rage not only among Arabs but also Muslims everywhere by exiling or executing Arafat.

Vice Prime Minister Ehud Olmert echoed threats by other Israeli officials who suggested last week's decision to "remove" Arafat means he might be sent into exile, further isolated at his West Bank compound or dealt with more harshly. But Olmert, considered a likely future candidate for premier, is the closest official to Prime Minister Ariel Sharon to say outright he might be killed.

The statement underscored the collapse of recent U.S.-backed peace efforts and the depths to which Israeli-Palestinian relations have sunk a decade after Arafat and then-premier Yitzhak Rabin agreed on the first Israel-PLO deals in September 1993 amid hopes the long-standing conflict might be resolved.

Powell, speaking from Baghdad during a visit to Iraq, said that Israeli politicians are not helping the U.S.-sponsored peace process with such statements.

Since mid-2002, the Bush administration has refused to deal with Arafat for peacemaking or for any other reason. Yet the United States worries that expelling him from his shattered West Bank headquarters would widen his influence by positioning him as a martyr with a broader stage to air his views.

"The Israelis know our position quite well," Powell said in a broadcast interview.

As for Olmert's statement to Israel Radio, Powell said: "There are many people in Israeli political life who make statements with regard to their political positions. I don't think it was helpful."

Israel has also decided to press on with its controversial security fence in the West Bank, reports CBS News Correspondent Robert Berger. The Cabinet decided to accelerate construction of the West Bank security barrier, aimed at keeping suicide bombers out of the country.

President Bush has called the barrier an obstacle to peace. To take U.S. objections into account, one area of the barrier, where Israel planned to confiscate a large piece of West Bank land, will not be built.

On Saturday, Arafat urged Israel to return to the negotiating table to end three years of violence in which more than 800 Israelis and some 2,500 Palestinians have been killed. Israeli leaders say Arafat is responsible at least indirectly for terror attacks, and they seek alternative Palestinian leaders.

Hundreds of Arafat's supporters streamed into his devastated West Bank compound Sunday for a fourth straight day, chanting that their 74-year-old leader "is a mountain that the wind can't shake."

A crowd of thousands, including many children, also marched through the West Bank city of Nablus.

At the weekly Israeli Cabinet meeting in Jerusalem, Defense Minister Shaul Mofaz laid down a list of demands from any new Palestinian government, according to a senior official who briefed reporters.

Mofaz was quoted as saying Israel will not cooperate with any government that carries out Arafat's orders or that strengthens his standing, and that any Palestinian government must act against militant groups and unite all security forces under the authority of a single person — not Arafat.

"There will be no progress without the Palestinians fighting terror. If they don't, we will," Mofaz said, adding that Israel will not accept the promises of a new cease-fire by militant groups, as proposed by the Palestinians.

Israel's leaders blame Arafat for blocking peace efforts and preventing a crackdown against the militant groups, and on Thursday its security Cabinet decided in principle to "remove" him. Immediate action was put off — but the result was an onslaught of international condemnation.

The Israeli decision came after two suicide bombings that killed 15 people last week, and as Palestinian Prime Minister-designate Ahmed Qureia was putting together a Cabinet following the Sept. 6 resignation of Mahmoud Abbas, who clashed with Arafat over control of security forces.

Olmert said another option for dealing with Arafat, whom he called "the greatest of terrorists," is a siege that "will isolate him from the world." Israeli leaders have said this could include cutting phone lines and barring visitors to his compound.

Palestinian legislator Saeb Erekat condemned Olmert's statements as "the behavior and actions of a mafia and not a government... This shows the gravity of the situation and the constant deterioration."

The threats against Arafat have set off daily protests in the West Bank and Gaza strip in support of Arafat. Supporters set up two tents inside Arafat's compound, saying they would act as "human shields" if Israeli troops try to seize him.

In the Gaza Strip on Sunday, Israeli soldiers shot and wounded seven youths among hundreds who gathered after school to throw stones at an army outpost near the Jewish settlement of Kfar Darom, witnesses said. The children, ranging in age from 9 to 16, were all shot in their lower bodies, the witnesses said. The army did not immediately comment on the incident.