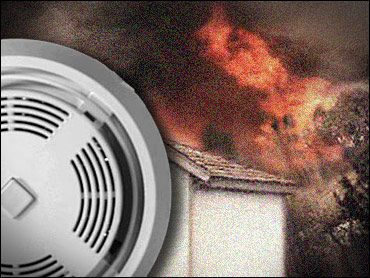 Anna Marie Newson thought her family would be safe with smoke detectors in her home's hallways and the bedrooms of her five children.

But the Milwaukee-area mother got an alarming wake-up call when the blaring detectors failed to rouse several of the children during an experiment done by local fire officials and a television news crew.

"We were outside and we could hear the alarms going off," Newson said in an interview this week. "It's kind of scary. At least now we know."

Those results helped prompt a warning from safety specialists that it may take more than just the traditional siren-based alarms to awaken young children during a fire.

That includes recordings of parents' voices, vibrating alarms or even flashing strobe lights, according to recommendations from Northbrook, Ill.-based Underwriters Laboratories, an independent organization that certifies safety for consumer products.

"There might not be a single answer to this complicated issue," said UL's John Drengenberg. "It seems clear, however, that some children, especially young children, may at times sleep so deeply that it may not be possible for the alarm alone to rouse them to the point where they can reliably evacuate a house on their own."

Government data show that from 1991 to 2000, there were more than 33,000 deaths from residential fires nationwide - 24 percent among children under 15, Underwriters Laboratories says.

The organization's recommendations were issued last week by a research panel that UL formed following experiments last fall involving Newson and another family on Milwaukee's WISN-TV, and a similar experiment at a Dallas-Fort Worth TV station.

Newson found she had to awaken several of her children, then aged 8 through 14, after eight minutes of blaring. Fire officials say less than two minutes is an optimal escape time.

The UL panel also reviewed other reports, including Australian research in 20 children aged 6 through 17 that found few consistently were roused by smoke alarms.

Children also are more likely to be disoriented and confused when awakened during the deep-sleep phase, he said.

"The amount of sound that's required to awaken a child during middle childhood is enormous, much greater than currently available smoke alarms," said Sheldon, who co-chaired the UL panel.

The investigation will include tests of the effectiveness of alternative technology, with results expected next year.