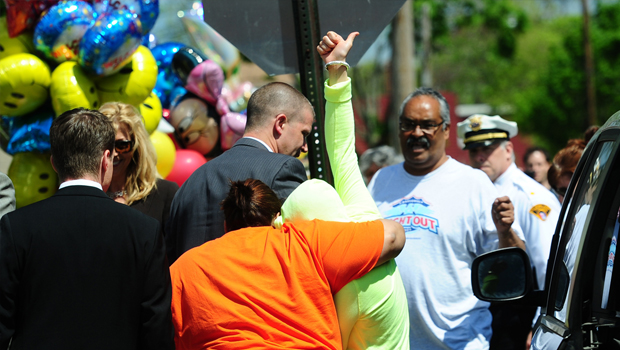 CLEVELAND Two of the women held captive for a decade at a run-down Cleveland house were welcomed home by cheering crowds of loved ones and neighbors with balloons and banners Wednesday before police charged the homeowner with rape and kidnapping.

Ariel Castro, 52, was charged with four counts of kidnapping and three counts of rape. His two brothers, Onil, 50, and Pedro, 54, were also arrested Monday but Cleveland City Prosecutor Victor Perez said there was no evidence to charge them with any crime.

Gina DeJesus, who disappeared in 2004, arrived home in the afternoon to chants of "Gina! Gina!" Wearing a bright yellow hooded sweatshirt, she was led through the crowd and into the house by a woman who put her arm around the young woman's shoulders and held her tight.

Nancy Ruiz, DeJesus' mother, thanked those who had helped the family over the past nine years.

Earlier in the day, Amanda Berry, 27, arrived at her sister's home, which was similarly festooned with dozens of colorful balloons and signs, one reading "We Never Lost Hope Mandy." Hundreds cheered wildly but weren't able to get a glimpse of Berry as she went in through the back. Berry's sister thanked the public for its support but asked for privacy.

The third captive, Michelle Knight, 32, was reported in good condition at Metro Health Medical Center, which a day earlier had reported that all three victims had been released. There was no immediate explanation from the hospital.

CBS affiliate WOIO-TV reports Berry realized she had the opportunity to escape when her 6-year-old daughter, who was born in captivity, said Ariel Castro had left. "Daddy's gone to go see grandma," the girl said, according to reporter Scott Taylor.

Family and residents of the tight-knit, mostly Puerto Rican neighborhood were shocked to learn that the missing girls were right in their own neighborhood the whole time, nevertheless being held by a man they were all familiar with. In the years after DeJesus disappeared, Ariel Castro handed out fliers with the 14-year-old's photo and performed music at a fundraiser held in her honor. When neighbors gathered for a candlelight vigil just a year ago to remember the girl, Castro was there too, comforting the girl's mother.

On "CBS This Morning" Wednesday, CBS News correspondent Dean Reynolds reports that a clearer picture has emerged of what went on inside the house. Sources tell CBS News that the three women were all restrained for at least part of their decade-long captivity. Later, they were allowed to walk around and watch TV.

Cleveland police say investigators have found ropes and chains inside the house where three women were found alive.

WOIO-TV reports that one woman told police she had gotten pregnant more than once but her captor beat her and she ended up losing the babies.

Ariel Castro's son, Anthony Castro, said in an interview with London's Daily Mail newspaper that he now speaks with his father just a few times a year and seldom visited his house. He said on his last visit, two weeks ago, his father wouldn't let him inside.

CBS News also obtained domestic violence records against Castro filed by his ex-wife, Grimilda Figueroa. The documents allege that Castro had "broken petitioner's nose (twice), ribs, lacerations, knocked out tooth, blood clot on brain, (inoperable tumor), dislocated shoulder, (twice, once on each side) threatened to kill petitioner and daughters 3 to 4 times just this year etc. Most recently threatened to kill her on August 25, 2005 and the children also."

Berry's 6-year-old daughter was found in the home when the three girls were rescued. Perez, the city prosecutor, said he could not say who the father was, but they were conducting a paternity test.

About a week ago, Castro took the 6-year-old girl to a nearby park, where they played in the grass, said Israel Lugo, a neighbor who lives down the street. "I asked him whose kid was it, and he told me his girlfriend's daughter," Lugo said.

Tito DeJesus, an uncle of Gina DeJesus, played in bands with Castro over the last 20 years. He recalled visiting Castro's house but never noticing anything out of the ordinary.

Juan Perez, who lives two doors down from the house, said Castro was always happy and respectful. "He gained trust with the kids and with the parents. You can only do that if you're nice," Perez said.

Castro also worked until recently as a school bus driver.

Police Chief Michael McGrath told NBC's "Today" show on Wednesday that he was "absolutely" sure police did everything they could to find the women over the years. He disputed claims by neighbors that officers had been called to the house before for suspicious circumstances. "We have no record of those calls coming in over the past 10 years," he said.

City Safety Director Martin Flask said Tuesday that investigators had no record of anyone calling about criminal activity at the house but were still checking police, fire and emergency databases.

Two neighbors said they called police to the Castro house on separate occasions.

Elsie Cintron, who lives three houses away, said her daughter saw a naked woman crawling in the backyard several years ago and called police. "But they didn't take it seriously," she said.

Another neighbor, Israel Lugo, said he heard pounding on some of the doors of the house in November 2011. Lugo said officers knocked on the front door, but no one answered. "They walked to side of the house and then left," he said.

"Everyone in the neighborhood did what they had to do," said Lupe Collins, who is close to relatives of the women. "The police didn't do their job."

Police did go to the house twice in the past 15 years, but not in connection with the women's disappearance, officials said.

Michelle Knight's mother, Barbara Knight, told the "Today" show that she hasn't seen her daughter yet, but hopes she knows she loves and missed her. She said they had a tense relationship before Michelle's disappearance and at the time thought her daughter maybe just didn't want to see her family anymore. She said Michelle Knight's child had been removed from the home just before her disappearance, and thought perhaps she had vanished because she was upset about "the baby."

"I know she's probably angry at the world because she probably thought she'd never be found," she said.

Knight added that she hopes their past tension can heal, and she wants to take her daughter back to Florida, where she now lives.

In 1993, Castro was arrested two days after Christmas on a domestic-violence charge and spent three days in jail before he was released on bond. The case was presented to a grand jury, but no indictment was returned, according to court documents, which don't detail the allegations. It's unclear who brought the charge against Castro, who was living at the home from which the women escaped Monday.

For years, Berry's mother kept her room exactly as it was, said Tina Miller, a cousin. When magazines addressed to Berry arrived, they were piled in the room alongside presents for birthdays and Christmases she missed. Berry's mother died in 2006.

Just over a month ago, Miller attended a vigil marking the 10th anniversary of Berry's disappearance.

Over the past decade or so, investigators twice dug up backyards looking for Berry and continued to receive tips about her and DeJesus every few months, even in recent years. The disappearance of the two girls was profiled on TV's "America's Most Wanted" in 2005. Few leads ever came in about Knight.