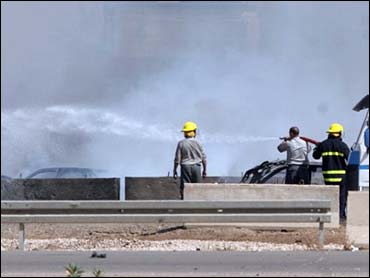 The explosion, which occurred shortly after 9 a.m., sent a huge cloud of black smoke billowing into the sky, destroyed several vehicles and underscored the difficulties U.S. and Iraqi authorities are facing to curb the rampant insurgency.

U.S. soldiers struck a blow against militants plotting attacks by capturing four wanted terrorists during separate raids since Sunday, including a former spy in Saddam's secret service who was believed to be financing several terrorist groups in western Baghdad's Ghazaliyah district, the military said in a statement Wednesday.

The former spy, whose identity was not revealed, was also suspected of working as a cameraman for a terrorist group, apparently filming attacks against coalition forces that are later posted on Internet sites or distributed to media outlets.

Iraqi authorities are trying to take the fight to insurgents, who have launched attacks that have killed at least 765 people since Iraq's new government was announced April 28. A massive Iraqi-led offensive has been launched, dubbed Operation Lightning, aimed at curbing the constant flow of violence.

But a suicide bomber slipped through the dragnet Wednesday, exploding his vehicle at the main checkpoint to Baghdad's international airport, said police Capt. Thalib Thamir.

An Internet statement purportedly released by the al Qaeda in Iraq terror group claimed responsibility for the attack. The statement's authenticity could not be verified.

The blast happened near the Abbas Ibn Firnas statue, commonly known as the "Flying Man," which depicts a winged medieval Arab astronomer. The statue is located between two car parks.

"Me and some colleagues at Iraqi Airways were waiting in line when we saw a speeding car, then we heard a big explosion," said Ghassan Yassin, one of at least seven Iraqis wounded. "The next thing I realized is that my car was on fire, I got out thorough the window after the doors are jammed due to the explosion."

Foreign extremists are thought to be a small portion of the Sunni-dominated insurgency, although they are blamed for some of the deadliest attacks, particularly spectacular suicide bombings.

Wednesday's attack near the airport, which scores of foreigners working here use daily to enter and leave this war-ravaged country, highlights the difficulties U.S. and Iraqi forces are having to defeat the insurgency and safeguard even Iraqi's most vital facilities.

In New York, Iraqi Foreign Minister Hoshyar Zebari said U.S.-led forces must remain in Iraq until the country's own soldiers and police can take responsibility for securing the nation amid its continuing insurgency.

Zebari told the United Nations Security Council on Tuesday that he was "concerned" about U.S.-led forces leaving before Iraqi security forces were ready to protect this country from insurgents.

"I'm a realist, OK, and we've seen that before. We need to complete this mission with their help," Zebari told The Associated Press in New York late Tuesday. "We are getting very close. The riding is getting tougher."

Acting U.S. Ambassador Anne Patterson, speaking on behalf of the multinational force, told the Security Council it won't remain in Iraq any longer than necessary, but no "specific timeline for the withdrawal" has been set.

But if Iraqi authorities want the force to stay, it shouldn't leave "until the Iraqis can meet the serious security challenges they face," she said.