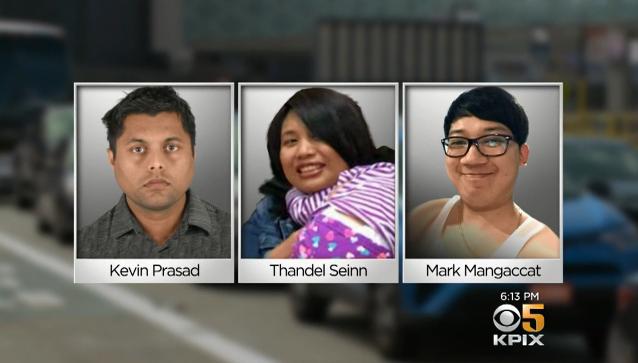 DALY CITY – A Daly City woman who lost her fiancé — the father of her three-year-old daughter — at the hands of a San Francisco International Airport coworker last week told CBS San Francisco she had no idea an innocent workplace crush could take such a deadly turn. Last week, 31-year-old Mark Mangaccat picked up his fiancée Thandel Seinn from her last shift at San Francisco International Airport. The couple had planned to move to Las Vegas to start a new life together with their child.

Seinn thought her coworker, 31-year-old Kevin Prasad, was a friend who knew that she and Mangaccat had already been together for years.

"We were friends. At the airport we work in same job; [my] boyfriend, me and him, we were friends," said Seinn.

Thandel and Mangaccat were preparing to get married and relocate to Las Vegas with their daughter.

Investigators believe that all changed when Prasad decided he would get Seinn to be with him by killing Mangaccat.

South San Francisco resident Prasad and 25-year-old Donovan Rivera of Hayward are charged in the murder of Mangaccat last Wednesday.

Authorities said he plotted to kill Managaccat, allegedly shooting him at close range in the couple's driveway.

When asked how many shots the suspect fired, Seinn remembered, "More than two. It went by so fast, but more than two. I know that."

Seinn said Prasad had asked for her to go out with him in the past, but she had never taken him seriously.

"He just tell me, 'Don't go' and 'I want to be with you,'" said Seinn, "He would just say something like a friendly joke."

Seinn said Prasad had never made her nervous.

Wagstaffe told CBS San Francisco that Prasad has no criminal history prior to the alleged shooting.

The DA explained that Prasad and Rivera, who served as the getaway driver, masterminded a way to kill Managaccat.

"As our victim was backing the car in, with his girlfriend in the car, Mr. Prasad jumped out of the car and came running up and fired through the window while they were both there," said Wagstaffe. "It is just through great fortune that she wasn't also struck by one of the five or six bullets that were fired."

Seinn said she never saw the killer at the time.

"I'm waiting and I'm sad and crying. Heartbroken," said Seinn. "So I'm crying and I'm thinking, 'What happened? He has no enemies. I don't have enemies either.'"

Seinn said as investigators were questioning her, she really had to think about who could have possibly done the crime. That was when Prasad's name came up, starting authorities on the investigation that led to the arrest of Prasad and Rivera the following day.

The two defendants made their initial court appearance Monday on murder charges with a special circumstance of lying in wait.

They did not enter pleas and will return to court on May 8 for appearance of their appointed Private Defender Program attorneys and to possibly enter pleas.

"I didn't want to lose my husband. He was my soulmate," said Seinn.