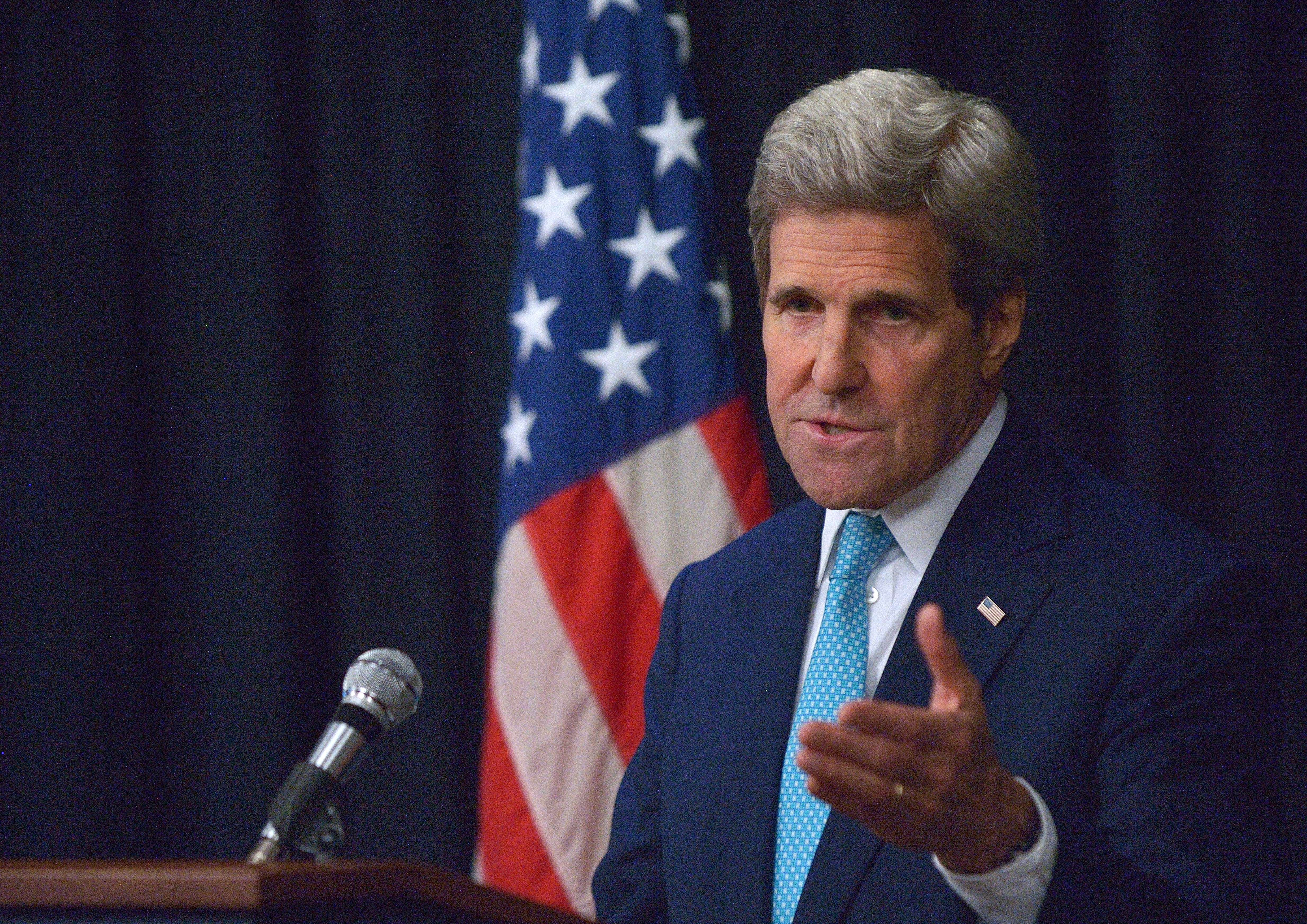 On Wednesday, Kerry told reporters that he will speak with Saudi officials about a possible pause in the Saudi-led military campaign against the Houthis in order to get food, fuel and medicine to civilians in Yemen, where there is an ongoing humanitarian crisis. The violence appeared to spread Wednesday across the Saudi border, as Shiite rebels from Yemen reportedly fired rockets into the neighboring Kingdom.

A Senior State Department official also said that Kerry plans to also meet with the new Saudi King and Foreign Minister to discuss the ongoing nuclear talks with Iran as well as the crises in Syria and Yemen.

At a news conference in Djibouti, a nearby African nation that he visited on his way to the kingdom, Kerry said the United States was deeply concerned by the worsening humanitarian conditions in Yemen. He spoke just a boat trip away from the scene of the fighting, where Iran-backed Houthi rebels were pressing on with ground offensives and Saudi Arabia and other Arab countries were continuing their month-and-a-half-long bombing campaign.

Trapped in the middle are Yemeni civilians. Aid groups say they're struggling to reach millions of people in need in what was the Arabian Peninsula's most impoverished state even before the war. With no end to the violence in sight, agencies are doing contingency planning for a prolonged conflict that prompts well over 100,000 Yemenis fleeing for abroad.

"The situation is getting more dire by the day," Kerry told reporters.

The discussions are taking place as the rebels and their allies consolidated their hold over parts of the southern port city of Aden after heavy fighting with a militia loyal to the government they chased out of the country in March. The rebels captured the area's presidential palace, officials said, in another sign of their resilience in the face of Saudi-led airstrikes.

More strikes Wednesday throughout the country killed dozens of rebels, according to security officials.

The U.N. says at least 646 civilians have been killed since the start of the bombing campaign March 26. Some 300,000 have been uprooted from their homes.

In Djibouti, which has taken in several thousand refugees, Kerry credited the Saudis with trying to ease access for aid organizations, blaming the Houthis for the continued violence. But not all humanitarian organizations agree, with several openly or implicitly criticizing the Saudi government for blocking air, land and sea routes into Yemen.

Kerry said he believed a break in the fighting could be arranged in the coming days, mentioning telephone conversations he had this week with the Saudi foreign minister and that of "another country" who indicated the Houthis might be on board. It was a clear reference to Iranian Foreign Minister Mohammad Javad Zarif.

Even a temporary halt to the fight "would be welcome news to the world," Kerry said. However, he stressed that any arrangement must entail conditions so no party to the conflict uses the moratorium to seize territory or otherwise gain an advantage, which could set back the humanitarian cause even further.

Yemen has long suffered from desperate poverty, political dysfunction and al-Qaida's most lethal branch. It has become more unstable in recent months as the Houthis, who are Shiite, seized much of the country and chased Yemen's internationally recognized president into exile. That prompted the Saudis and other Gulf Arab states to intervene. The Saudis also are backing pro-government forces on the ground trying to fight back against the Houthis.

To help ease the growing need for food, water and shelter, Kerry announced $68 million in new U.S. aid to Yemen. The money will go to the U.N. food, children's and refugee agencies. An additional $2 million will be provided to the U.N. High Commissioner for Refugees to help Djibouti deal with the influx of Yemenis.

A sleepy coastal nation roughly the size of New Jersey with less than 1 million people in the Horn of Africa, Djibouti has become a critical part of U.S. policy in the region.

With U.S. ground forces out of Yemen, Djibouti is a launching pad for drone attacks on al-Qaida and other extremist groups there and is serving as a key transit point for Americans trying to get home.

Kerry thanked Djibouti for its support after meeting with President Ismail Omar Guelleh and Foreign Minister Mahamoud Ali Youssouf. And at an embassy ceremony, Kerry presented passports and travel visas to Americans and their family members planning to fly on to the United States.