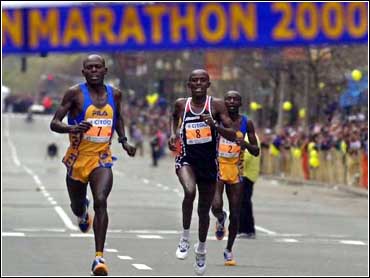 First, it was the Kenyan men. Now, the women are winning the Boston Marathon.

Lagat and Abera were both timed in 2 hours, 9 minutes, 47 seconds, with Tanui three seconds back.

The women's ending wasn't as close but it was still the same: A Kenyan wearing the laurel wreath.

Catherine Ndereba, competing in only her third marathon, pulled away in the final mile and became the first Kenyan winner, at 2:26:11. Ndereba thwarted the bid of Ethiopia's Fatuma Roba to become the first competitor male or female to win the race four consecutive times.

The struggling Roba finished third at 2:26:27, the same time as runner-up Irina Bogacheva of Kyrgyzstan, who came from behind and beat her in the final stride.

Like the men, the women's finish was the closest ever between the top two and among the top three runners.

"I'm not only happy to win, but I'm going to the Olympics and represent my country," said Lagat, who took up running professionally only after his doctor told him in 1992 that he had a heart condition and might die.

With this race being an Olympic qualifier for the Kenyan men's Olympic team, Lagat and Tanui earned places on the squad, joining Kenneth Cheruyiot, winner of Sunday's Rotterdam Marathon.

"After I started running, my heart problem disappeared," he said. "I'm OK now."

Staying with the lead pack throughout the race that was slowed by headwinds and cold, the persistent Lagat came into the final stretch locked in a dramatic duel with Abera and Tanui, the 1996 and 1998 winner.

The three exchanged the lead a couple of times, and with less than a half-mile remaining, it appeared Tanui would go on to his third victory.

But Lagat was not to be denied, and his final surge enabled him to edge the charging Abera as Tanui faded.

Abera, running on his 22nd birthday, contended the Kenyans were kicking and pushing him.

"I can't say it was intentional," he said, "but it was a strain on my muscles."

Tanui, the most experienced runner in the men's elite field, admitted he made his move too early.

"Everybody gets to make a mistake, and that was my mistake," the 34-year-old Kenyan said. "I felt strong at the end, but I was too nervous."

Overall, Kenyans took seven of the top 10 places. Their winning streak began in 1991 with Ibrahim Hussein. The last non-Kenyan winner was Seoul Olympic champion Gelindo Bordin of Italy in 1990.

Ndereba, a 27-year-old mother of a 2-year-old girl, was not among the leaders early but began reeling in them after the halfway point en route to her first marathon victory.

"I had confidence that I was going to do the last half in less than 73 minutes," she said. "I have a best time of 69 minutes for the half-marathon. I had confidence I could do it in 1:10."

Nevertheless, Ndereba, who was sixth in her Boston debut last year and second at New York six months ago, didn't think she could end Roba's magnificent reign.

"To beat her was something I did not expect," she said.

Tears streamed down Ndereba's face during the playing of the Kenyan national anthem after the race.

"I was surprised," she said. "I was very happy and overwhelmed."

"The Olympics has been one of my goals and that's what I've been looking for all these years," Ndereba said. "I've run in a lot of important races, but I've never represented my country in a big competition."

Ndereba proved she could run with the best. She caught Roba, the 1996 Olympic champion, about 21.7 miles into the 26.2-mile race and ran with her until the final mile. Then Ndereba bolted ahead.

Obviously tiring and eager to finish, Roba kept looking behind to see if anyone was approaching. It was Bogacheva.

Chipping away consistently at Roba's advantage, the 38-year-old Bogacheva made one final lunge at the finish to take second place.

Roba said she didn't have any physical problems but was bothered by the wind, which was 13 mph at the start, and the temperatures in the mid-40s.

Franz Nietlispach of Switzerland extended his winning streak to four in the men's wheelchair division, winning by more than five minutes at 1:33:32, the slowest winning time since 1989.

Jean Driscoll of Champaign, Ill., won her eighth wheelchair title at 2:00:53, the slowest since 1988, ending the three-race winning streak of Louise Savage of Australia.