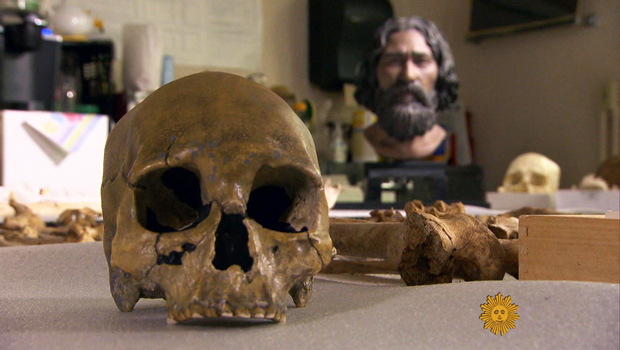 "The Man From Kennewick" sounds like the title of a mystery story. And so it is . . . a mystery whose origins go way, way back. Chip Reid has been doing some digging:

Eighteen years ago two teenagers made news when they found a skull on the bank of the Columbia River near Kennewick, Wash. Suspecting foul play, they called the police who thought the skull looked very old.

They were right. Anthropologists excavated the area and found the full skeleton, and determined it had been carefully buried along the river 9,000 years ago.

"It is certainly America's most important skeleton," said Doug Owsley, the Smithsonian's top physical anthropologist. "It is an exceptionally rare discovery that does not happen but once in a lifetime."

Owsley sued the federal government and local Indian tribes for the right to study Kennewick Man. The tribes believe the bones are ancestral and should be reburied. But the courts found that the remains had little genetic connection to present-day Indians, and ruled in favor of science.

After years of work, Owsley and a team of scientists are publishing Kennewick Man's biography.

"Most people are not aware of the wealth of information that can come from human remains," said Owsley.

Kennewick Man was 5'7", a muscular 163 pounds, and died when he was about 40 years old. His intelligence was comparable to that of present-day humans.

"I truly consider him an ambassador from an ancient time period, enlightening us to what his life was like," said Owsley.

In a word, his life was brutal, having suffered multiple injuries. "His existence reflects a very strenuous physical existence," said Owsley. "He has half a dozen fractured ribs -- the ribs on this side, the right side, failed to mend properly."

Add to that a severe shoulder injury, two skull fractures, and worse: When he was 15 to 20 years old, someone threw a spear at him, and the spearhead lodged permanently in his hip.

"I think this was something that was intentionally lobbed at this man with the intention of killing him," said Owsley.

Owsley said Kennewick Man is causing scientists to re-think how humans first came to this continent. He said humans came to North America thousands of years earlier than was previously thought.

The traditional theory is that people came by foot across the Bering Strait on a land bridge that once existed between Asia and what is now Alaska. But the existence of Kennewick Man, he said, is evidence of boat use: "They had boats coming into the New World much earlier, and that he is from these East Asian coastal populations."

A life on the water is consistent with Kennewick Man's diet, as determined by the chemical signature discovered in his bones.

"This man is a marine mammal hunter . . . You find that this man is heavily dependent on seals," said Owsley. Also, "he's got lots of salmon in his diet."

His teeth were worn down, and show no sign of cavities.

His enormously strong right arm suggests that he hunted with a spear.

One of Owsley's biggest challenges was re-creating what Kennewick Man actually looked like. Sculptors took months to build a likeness based on the shape of his skull and archival photos from Asian coastal people.

Native Americans are still fighting for the right to bury Kennewick Man. But the federal government is holding on to his remains until the dispute between the tribes and the scientists can be resolved.

Doug Owsley believes that further study will help explain how Kennewick Man lived and died, and why this traveling hunter -- who is believed to have spent much of his life on the central Alaskan coast -- was buried hundreds of miles away in the interior of what is now the state of Washington.

"I feel like the skeleton is just beginning to talk to us, and we need to carry on the conversation," he said.

A conversation with a man who hasn't spoken a word in 9,000 years.