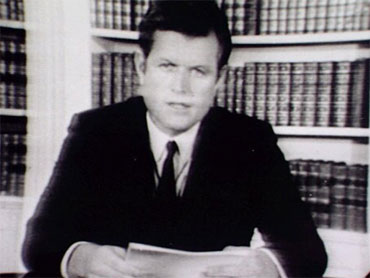 In a posthumous memoir, Massachusetts Sen. Edward M. Kennedy writes of fear and remorse surrounding the fateful events on Chappaquiddick Island in 1969, when his car accident left a woman dead, and says he accepted the finding that a lone gunman assassinated his brother President John F. Kennedy.

The memoir, "True Compass," is to be published Sept. 14 by Twelve, a division of the Hachette book group. The 532-page book was obtained early by The New York Times.

In it, Kennedy says his actions on Chappaquiddick on July 18, 1969, were "inexcusable." He says he was afraid and "made terrible decisions" and had to live with the guilt for more than four decades.

Kennedy drove off a bridge into a pond. He swam to safety, leaving Mary Jo Kopechne in the car.

Kopechne, a worker with slain Sen. Robert F. Kennedy's campaign, was found dead in the submerged car's back seat 10 hours later. Kennedy, then 37, pleaded guilty to leaving the scene of an accident and got a suspended sentence and probation.

Kennedy also writes in the memoir that he always accepted the official findings on his brother John's assassination.

He said he had a full briefing by Earl Warren, the chief justice on the commission that investigated the Nov. 22, 1963, Dallas shooting, which was attributed to Lee Harvey Oswald. He said he was convinced the Warren Commission got it right and he was "satisfied then, and satisfied now."

In the book, Kennedy writes candidly about his battle with brain cancer and his "self-destructive drinking," especially after the 1968 death of his brother Robert.

He also explains why he decided to run for the presidency in 1980, saying he was motivated in part by his differences with then-President Jimmy Carter. He criticized Carter's go-slow approach to providing universal health care.

The book was written with the help of a collaborator and was based on contemporaneous notes taken by Kennedy throughout his life and hours of recordings for an oral history project.