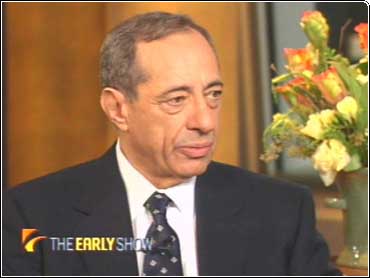 The Iowa caucuses, which will be held Jan. 24, are likely to narrow the field of candidates going into the New Hampshire primary on Feb. 1.

Vice President Gore "should be concerned" about Bill Bradley, says Cuomo, but he thinks ultimately Gore will benefit from his competition with Bradley.

"I think in the long run, Bill Bradley will be the reason that Al Gore will do well," Cuomo says.

"Were it not for Bill Bradley entering the race, Al Gore might have been anointed as a candidate for the Democrats, which meant he never would have escaped the shadow of the vice presidency and shown what he is," he adds.

"I think he's doing well and will probably win, but it is a race with Bill Bradley," Cuomo says.

In contrast, former Republican vice presidential candidate Kemp contends that Bradley has a shot at the presidency.

"Bradley has a tremendous opportunity," Kemp says. "He's kind of a 'Mr. Smith Goes to Washington' story. And if he keeps that up and mixes it up with Gore, I think he has a good chance of winning New Hampshire and picking up both California and New York."

When it comes to Gov. George W. Bush's proposed $483 billion tax cut plan, Cuomo feels that the candidate should have learned from his father's mistakes.

"If I were McCain, I'd do exactly what he's doing," Cuomo says.

Former President Bush "paid a terrible price, cutting taxes too much," Cuomo says. "He had to raise taxes, and that's where McCain has George W. Bush in the same mistake that the Republicans made in 1996."

"George Bush has done a very credible job of cutting taxes in the state of Texas," Kemp declares.

"The trillion dollars of surplus over the next eight or nine years should go back to working men and women and families and to make the economy grow larger than it is today," Kemp adds.

One thing both pundits agree on is that the Reform party should be heard.

"The idea of Trump as president is like having Evil Knievel running the space program in Texas," Kemp says.

Adds Kemp: "It would be wise to let them in on the debates on the basis of their strength as a party in the last two elections. It would be the smart and right thing to do for both established parties."