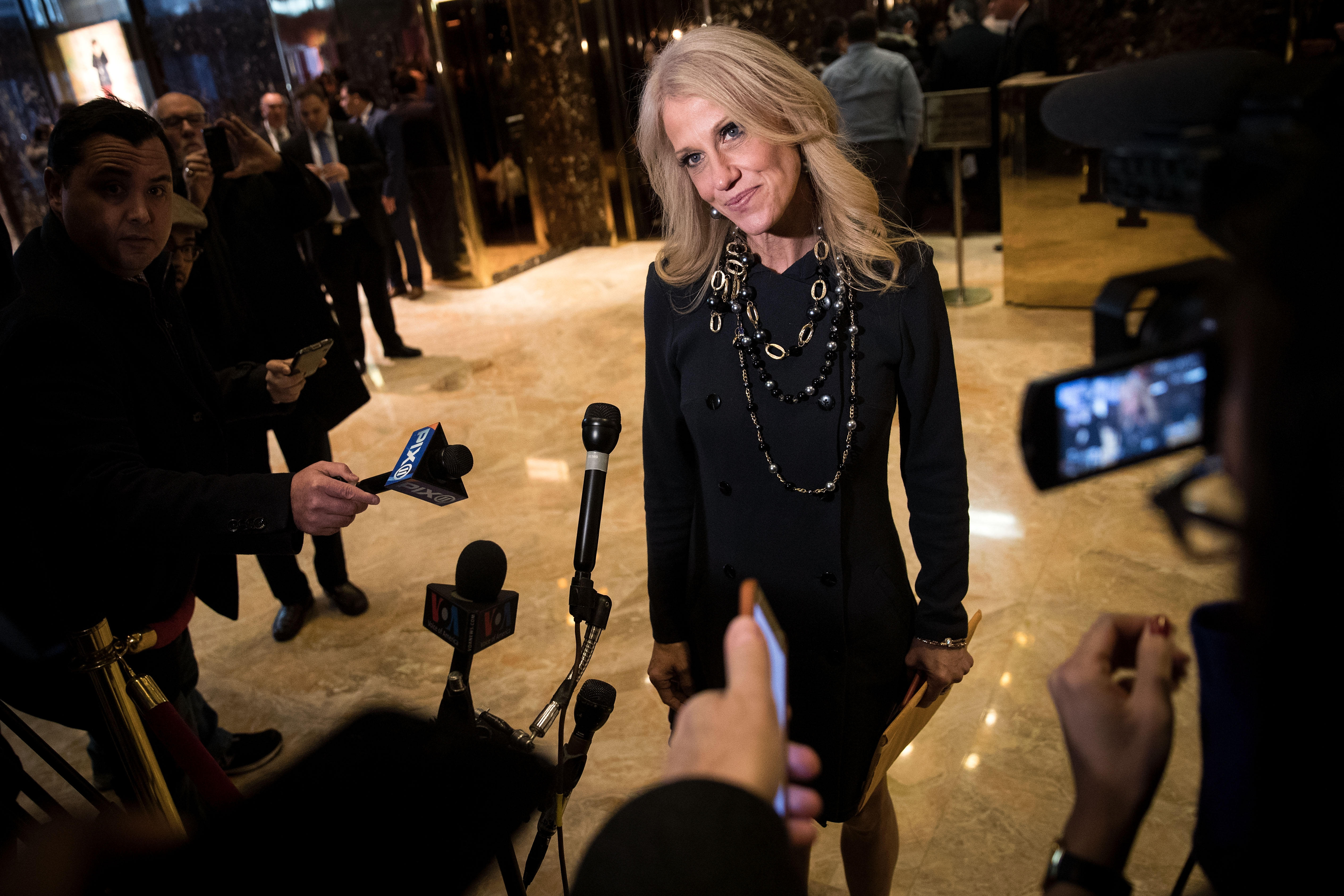 Kellyanne Conway took aim at feminism on Thursday, dismissing the term as “anti-male” and “pro-abortion” at the Conservative Political Action Conference and saying she wasn’t comfortable subscribing to the term “in the classic sense.”

“I’m neither anti-male or pro-abortion in this context,” Conway explained of her idea that Democrats have hijacked the term to the grassroots audience.

“I was raised to be a strong, independent woman, without anyone saying the word ‘feminist’ or having a political conversation,” she added.

The White House adviser, who is the first woman to have managed a winning presidential campaign, went on to explain that she believed in tenets of what she called “individual feminism.”

“I look at myself as a product of my choices, not a victim of my circumstances and that’s really to me what conservative feminism, if you will, is all about,” Conway said to cheers.

Merriam-Webster was quick to counter Conway’s definition of the word with a tweet: “’Feminism’ is defined as ‘the belief that men and women should have equal rights and opportunities.’”

Conway also slammed what she views as the hypocrisy of liberal feminists, who she accused of having problems with women in power – what she called a “presumptive negativity about women and power.”

“I mean this whole sisterhood, this whole lets go march for women’s rights, and you know, just constantly talking about what women look like or what they wear or making fun of their choices or presuming that they’re not as powerful as the men around,” Conway explained.

She complimented the women who “looked past the commonality of gender” and voted for Trump based on shared values. Conway mentioned Hillary Clinton but once during her 15 minute long Q&A.

“Hillary Clinton should be applauded for her willingness to serve publicly,” Conway added.

Conway, who has been relatively absent from the airwaves after a string of unforced errors, sang the praises of her boss and his commitment to “promoting and elevating women” in his campaign and administration. Trump has received criticism for staffing an overwhelming male Cabinet.

While President Trump pulled out of the grassroots conference that caters to college-aged conservatives at the last minute during last year’s Presidential primary holding a rally instead — what organizers called “an affront to conservatives” at the time — Conway joked that by the end of Trump’s speech tomorrow, the conference would be called “T-PAC.”

The chipper White House adviser also offered some life lessons to the audience of conservatives: don’t live online, live in reality, and help each other out.

Before concluding the interview, Conway squeezed in one last anecdote for women in the audience about how she assesses her self-worth on a daily basis: “I’ll have what he’s having,” she told the crowd of a time when she, cribbing a line from “When Harry Met Sally.”

The original line from the movie, said aloud by a patron who has just overheard Sally’s rowdy and slightly inappropriate conversation with Harry in the middle of a restaurant, is “I’ll have what she’s having.”