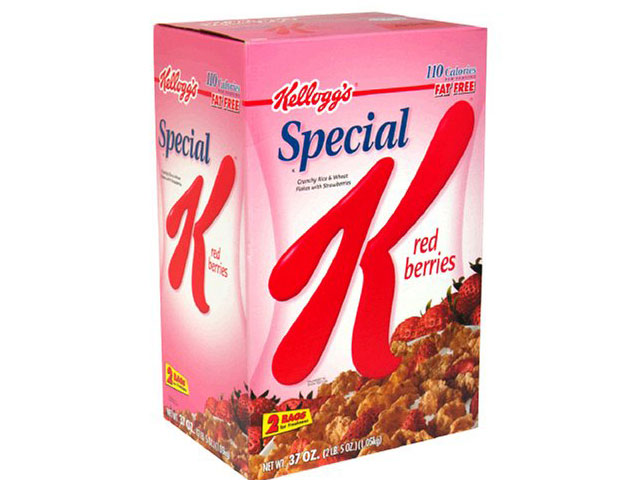 NEW YORK Special K was once just a line of cereals. Today, it's a diet food empire.

The brand first hit shelves in 1955 as a no-frills breakfast alternative but now caters to dieters who see its airy chips and pastries as a way to beat cravings and lose weight. And this summer, Kellogg Co. (K) is building on its biggest moneymaker with a "hot cereal" called Special K Nourish that's made with quinoa and other grains.

The new line, which promises to fill people up with 8 grams of protein and 5 grams of fiber, reflects Special K's push to move in step with evolving trends. Until now, Special K products largely gave dieters low-calorie imitations of their fantasy foods. But weight watchers are increasingly looking for added benefits nutritional benefits, rather than just counting calories.

The Special K Nourish hot cereal will come in individual serving cups; people add water and toppings that come in separate compartments on the lids. The products, which have less than 200 calories, are slated to hit stores in July and will come in Maple Brown Sugar, Cranberry Almond and Cinnamon Raisin Pecan. A line of Nourish bars will come in Dark Chocolate Nut, Cranberry Bliss and Lemon Twist.

Special K's evolution to stay relevant is critical for Kellogg. The company, which also makes Frosted Flakes and Eggo waffles, has been struggling to grow sales at a time when Americans are looking for on-the-go options. Over the past decade, for example, sales of cold cereals in the U.S. have grown just 6 percent to $8.9 billion, according to the market researcher Euromonitor International.

But Special K has been standout for Kellogg, with the brand's market share increasing to 5 percent, up from 3.3 percent a decade ago, according to Euromonitor.

The broader transformation of Special K into a weight management tool is also a reflection of its "Special K Challenge" ad campaign that first aired in 2003. Those ads famously promised that women would be able to lose 6 pounds in two weeks by replacing breakfast and lunch with Special K and having a sensible dinner at night.

"It really hit on the need women had for easy, attainable way to manage their weight," Geoffroy said.

For many looking to shed a few pounds, the Special K brand became a psychological stamp of approval and Kellogg has been churning out spinoff products ever since. Shakes and bars came in 2006, followed by cracker chips in 2009 and popcorn chips last year. Three types of breakfast sandwiches popped up in frozen food sections this past January.

Last year, Kellogg even transformed the Special K website into a more sophisticated weight management site. Visitors can sign up for meal plans that help them reach their diet goal; at least one Special K product is included each day's plan, sometimes two or three. The site now has more than 2 million members.

Weight Watchers, meanwhile, says it doesn't see Special K as a challenger. The company says its approach is more holistic and follows the adage that "teaching a man to fish" is better than giving him a fish to eat for just one meal.

"That approach is like giving a person a cod for breakfast and a mackerel for lunch but the person still hasn't learned how to fish," she said.

Miller-Kobach also noted that people also get sick of eating the same thing all the time, which is why diet food makers have to roll out so many product extensions. Other healthy eating advocates question the nutritional credentials of such packaged snacks, and whether they have any role in a healthy diet.

Michael Jacobson, executive director of the Center for Science in the Public Interest, notes that there's a difference between trying to lose weight and eating better.

So while the Special K cereal bars may only be 90 calories, for example, he notes that they're full of corn syrup and a long list of other ingredients people may not recognize.

"It probably provides 90 calories of a tasty snack but it's not a health food," Jacobson said.

Lindsay Cobb, a 30-year-old who works in finance in New York City, got into the habit of eating Special K with Red Berries for breakfast after trying it at her mother's house four years ago.

"My metabolism was slowing down and it beat having a bagel in the morning," she said.

She still eats it for breakfast on most weekdays, estimating that the generous bowls she pours herself clock in at around 250 calories with skim milk. And Cobb is usually willing to try whatever new Special K products she sees at the supermarket at least once.

Even though she doesn't like to snack often, she trusts that a Special K treat won't crash her diet.

​World oil market demand is catching up with supply