Katy Perry puts her own unique stamp on every song she sings. With Anthony Mason now, we'll Take Note:
(A previous version of this story was broadcast on September 26, 2010.)

She's the pop star with the pin-up girl looks. Three years after Katy Perry's breakthrough hit, her songs have sold more than 55 million downloads . . . her success built on a playful flirtation with what she calls obvious innuendo:

"To me it's like walking the line. It's the art of the tease," she said.

After scoring the runaway hit of last summer ("California Gurls") and following it with three more Number One smashes ("Teenage Dream," "Firework" and "E.T."), Perry seems inescapable and unstoppable:

On the day her current album, "Teenage Dream," was released - and went straight to Number One - she was making her first appearance on "The Late Show With David Letterman."

"So, you're not nervous?" asked Mason.

"No," she said. "It's not like some investigative thing where you have to keep your guard up. It's cool."

So what about being interviewed by an investigative journalist?

Her arrival at the studio was greeted by hundreds of fans and a human wall of paparazzi.

Perry's outrageous outfits have been known to raise eyebrows: "But I get a sense sometimes you like to create waves," said Mason.

The 25-year-old grew up in Santa Barbara. At the beach near her home she said, "There something really magical about this place."

It was her church that bought Perry her first guitar, for her 13th birthday. Her parents, Keith and Mary Hudson, are born-again evangelical pastors.

"My friends all had the same life. They all went to church with me, went to church school, you know, we went to church camp," Perry said. "Everything was related to my faith. And so I didn't have any outside influences."

She was signed to a Nashville gospel label, and in 2001 released her first album under the name she was born with: "Katy Hudson." But the record went nowhere:

"The label went bankrupt and it folded, and I didn't turn into Amy Grant like I wanted to," Perry said.

But slowly Perry was being exposed to the outside world.

"And, you know, I just started little by little asking, 'Hey, you know, can I listen to the Beatles?' 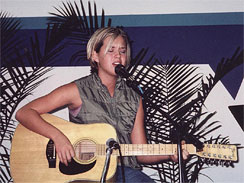 "And I had friends that had influenced their taste on me. You know, friends that I looked up to that were so much cooler - they knew about the world, you know? And I was just like, 'Wow. Teach me everything!"

She went back to the West Coast determined to become a pop star. It was a struggle.

"You couldn't get a record deal?" Mason said.

"Oh, I could get record deals! I was the queen of getting records deals," she laughed. "I just couldn't keep record deals."

She was signed and dropped by two more labels: "There were people that said, 'We've already spent money on her, She's not, you know, we need fresh meat.'

"Everyone kind of looked at me a little bit like damaged goods, in a way."

Finally, Capitol picked her up, changed her name to Katy Perry (to avoid her being confused with actress Kate Hudson), and in the summer of 2008 released the anthem to bisexual curiosity that changed everything: "I Kissed a Girl," which would spend 7 weeks at Number One.

"Did you talk to your mother about that song?" Mason asked.

"I talked to both of my parents. I think my sister talked to them first."

"Did you ask your sister to talk to them first?"

"Oh, of course!" Perry said. "You know, I was a bit hesitant to show my Mom and Dad. But you know, with me and my parents everything has kind of been like, 'And yeah, so this happened today.' Not putting so much emphasis on 'Mom and Dad, I have something to tell you.' It was kind of more like, 'Pass the salt,' ya know?

Perry's parents signaled their approval of their daughter's career change by making a cameo appearance in the video for her next hit, "Hot 'n' Cold."

As Perry's star grew brighter, her outfits got louder: At a photo shoot for her new perfume called Purr, she dressed in a pink and purple latex catsuit.

"I don't really know where to put this thing - I've never had a tail," she said.

"I've actually never interviewed anybody with a tail, either," Mason said.

But Perry insists there's more to be being a pop star: