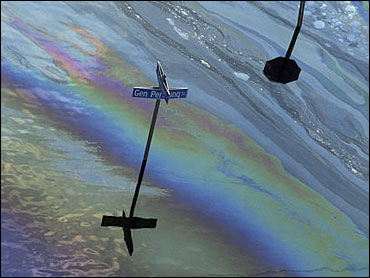 2:54 p.m.
WASHINGTON (AP) — Mike Brown says he has resigned as director of the Federal Emergency Management Agency. Brown came under fire over the federal response to Hurricane Katrina. He was called back to Washington last week and replaced as the head of the on-site federal relief and recovery effort.

2:45 p.m.
NEW ORLEANS (AP) — Forty-five bodies have been found at a hospital that was evacuated more than a week ago after it was surrounded by floodwaters unleashed by Hurricane Katrina, a state health official said Monday. The bodies were located Sunday at Memorial Medical Center, said Bob Johannesen, a spokesman for the Department of Health and Hospitals. Johannesen said the bodies were those of patients, but he had no other information.

The 317-bed hospital, owned by TenetHealthcare Corp., was surrounded by floodwaters in the aftermath of the hurricane and was evacuated.

11:04 a.m.
NEW ORLEANS (AP) — President Bush on Monday denied there was any racial component to people being left behind after Hurricane Katrina, despite assertions by some that the response would have been faster if so many of the victims were not poor and black.

NEW ORLEANS (AP) — Business owners in the central business district were issued passes into the city Monday to retrieve vital records or equipment needed to run their companies, as New Orleans slowly and painfully stirred back to life two weeks after being slammed by Katrina.

8:34 a.m.
(CBS) — After spending time councelling rescue workers in New Orleans, Dr. Phil McGraw told with Harry Smith of The Early Show that television news has portrayed the flooding and suffering quite well, but "what you miss on television is the smell. You miss the heat. You miss the wilting humidity."

"[It is] all of those things together which just make these rescue
workers so tired," Dr. Phil said.

The parking lot outside a FedEx Kinko's on the southern outskirts of this sprawling city was dotted with Louisiana license plates. In the days following the storm that displaced hundreds of thousands of people, this place of computers, printers, fax machines, copiers and Internet connectivity became a de facto office for some of the wandering workers and professionals of New Orleans.

One woman walked right up to the counter. "I'm from New Orleans," she said. "Can I use the computer for free?"

The cashier told her she would have to pay — 20 to 30 cents per minute.

3:50 a.m.
ITHACA, N.Y. (AP) — Pets left stranded by Hurricane Katrina are getting some aid from Cornell University. Four veterinarians and a couple fourth-year students from the school's College of Veterinary Medicine headed to Baton Rouge Sunday to help care for an estimated one-thousand animals left sick, injured or stranded by Katrina. An emergency shelter has been set up at Louisiana State University.

3:20 a.m.
BATON ROUGE, La. (AP) — With New Orleans' industries devastated and many of its individual taxpayers scattered across the country, Louisiana faces huge new budget problems in the wake of Hurricane Katrina. Those new problems are adding to old ones across a state where nearly one in five residents lived in poverty before the storm, and even more depended on government social and health services.

It's clear that Katrina created a huge hole in Louisiana's $18.7 billion state budget, but there's no consensus on how big that hole is or how to plug it. "The whole metro area down there is at least a quarter of the population, and I'm sure it's more than a quarter of the state's economy," said Greg Albrecht, economist for the Louisiana Legislative Fiscal Office.

Shipping was disrupted, along with much oil and gas production. Agriculture was battered by wind and flooding, and the seafood industry is threatened by the toxic muck draining through and around southeast Louisiana. Some displaced businesses can be salvaged; others may be beyond repair.

3:15 a.m.
PORTLAND, Ore. (AP) — A small group of storm victims arrived in Portland by bus Saturday in a trip arranged by a pastor who grew up in Gulfport, Miss. The new arrivals boosted the number of survivors in Oregon to 234.

The Gulfport group was invited by the Powerhouse Temple Church of God In Christ. Pastor Mary Overstreet said she cashed in two certificates of deposit and sold her Arizona vacation home for money to help people from her hometown. Overstreet said she will pay the cost of rent, reduced by the landlord, and utilities in a southeast Portland apartment complex. She plans to provide the same help for another 20 to 30 people who want to come to the state.

"They are broke, homeless, disturbed and need something to get them back on their feet," Overstreet said. "I figure, why give them a cot when I could give them a key?"

3:10 a.m.
LITTLE ROCK, Ark. (AP) — Arkansas is second only to Texas in the number of Katrina evacuees who have settled there, either temporarily or permanents. The surge of storm victims is a two-and-half percent jump in the population of Arkansas, where some flood victims are staying in spare bedrooms and vacation homes and others are taking in pets the area Humane Society can't keep.

"They treat us absolutely fantastic," says one flood victim, Leon Johnson of New Orleans, who is staying at a camp in Little Rock.

3:00 a.m.
SYRACUSE, N.Y. (AP) — The "American Idols Live" tour finished up in Syracuse and stayed an extra day for a benefit for Hurricane Katrina relief, with all proceeds going to the American Red Cross.

Idol winner Carrie Underwood, along with runner-up Bo Bice and the other eight Idol finalists, held the benefit on Sunday at the War Memorial at Oncenter. A sold-out crowd of 6,000 paid 35 to 45 dollars each. Underwood, of Checotah, Oklahoma, says she'll also donate the revenues from her merchandise sales at the benefit concert to the Humane Society of the United States to help pets stranded in the hurricane region.