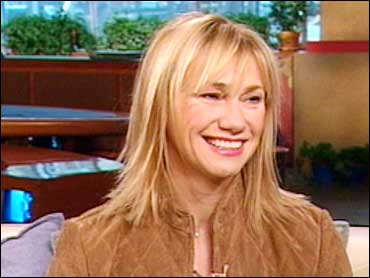 In a career that has already lasted two decades, three-time Emmy winner Kathy Baker is best known for her role in the television series "Picket Fences," as well as in the films "The Cider House Rules" and "Edward Scissorhands."

The actress is back on the big screen in the Golden Globe-nominated Civil War epic "Cold Mountain" co-starring with Jude Law, Nicole Kidman and Renee Zellweger.

Baker describes her character Sally Swanger to The Early Show co-anchor Harry Smith as the matriarchal figure of the film.

Baker explains, "She introduces the two characters to each other. She is sort of the busybody, who knows that Inman (Law) wants to meet Ada (Kidman) and gets Ruby, Renee Zelweger's character, over to meet Ada during the war."

But Sally undergoes great tragedy. Her husband is too old to fight and her young 18- and 20-year-old sons have to go to war and fight, while she is left with the farm, facing the cruelty of local militia that leave her mute.

Baker says it was director Anthony Minghella choice for her character to turn mute. She notes, "Someone asked me, is it that she can't talk? Or she won't talk? And I think the trauma has just left her without a voice. She has nothing more to say. But it was an interesting challenge to play mute."

Sleeping With The Enemy?

About working with Kidman and Zellweger, Baker says, "It's like a great tennis match. You only get better because you're working with the great people."

On a personal level, Baker shares her struggle of being a parent of two sons, one of whom suffers from ADD.

She says, "Just to get a child focused is hard enough, but ADD is a condition where it's almost like someone who needs glasses. If you don't wear your glasses, you can't see the board. In our case, we chose the medication, which changed our lives. And we chose therapy and we chose working with the school system. And I feel you really have to get in there and be an advocate for your child."

Some Facts About Kathy Baker