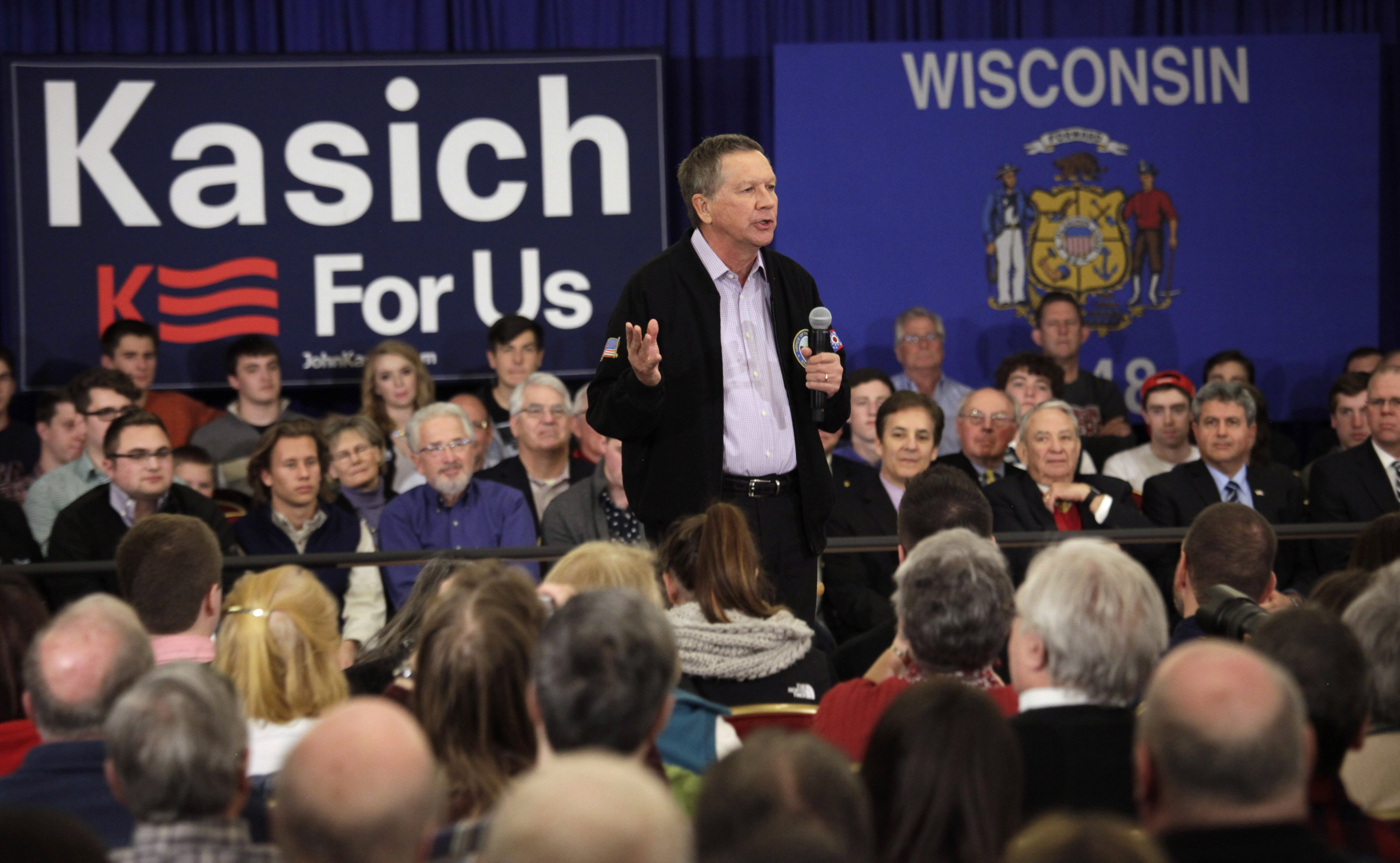 Here's one sign you're not a New Yorker: You take your first bite of pizza in front of the New York City press corps -- with a fork.

Ohio Gov. John Kasich did just that on Wednesday when he made his first foray into New York politics right in Donald Trump's backyard, taking his awkward-dad routine to Gino's Pizzeria in Queens.

"I was just walking down the street and these people said, 'This isn't Trump territory - this is Kasich territory!" the Republican presidential candidate told reporters over the roar of honking horns on a sidewalk on Crossbay Boulevard in Howard Beach.

"I think New York is so dynamic, and somebody was saying this thing about New York values," Kasich said, referring to Ted Cruz denigrating "New York values" in a January attack against Trump.

"I'll tell you what New York values are for me: Excitement, innovation, change and time just flies when you're here," he said.

Kasich is yet again an underdog in New York's April 19 primary where 95 delegates are up for grabs, but as usual, he boasted that he's the only Republican with poll numbers that beat Hillary Clinton. Kasich badly lags behind Trump and Ted Cruz in the GOP delegate hunt, but said he doesn't think any candidate will make it to the convention with enough delegates to capture the nomination.

Kasich, who notched a surprise 2nd place finish in the New Hampshire primary in February, said he thinks other moderate-heavy northeastern primary states like New York, New Jersey, Connecticut, and Pennsylvania are his "home court."

Kasich slid into a booth, grabbed a slice of veggie pizza that he pulled on to his plate and promptly began eating with a fork - a no-no in New York. Mayor Bill de Blasio was roundly mocked when he did the same shortly after taking office two years ago, as was Trump himself when he used a knife and fork during a 2011 meet-up with Sarah Palin.

Perhaps realizing his gaffe, Kasich soon picked up the slice with two hands, alternating between his slice and the sausage and peppers on the table.

"This sausage is great," Kasich declared to the mass of reporters who circled his booth in the back of the restaurant.

A young boy slid into Kasich's booth for a photo. Kasich struck up a conversation with his mother, who told him she was from Paraguay.

"I've never been to Paraguay," he said. "You're not going to believe this, but I've actually been to Uruguay. I went body surfing with the President of Uruguay!"

The governor, who had just proclaimed his love for hispanics, glanced around. "We got any more Latinos around?" he asked.

After getting leftovers wrapped up in a doggie bag, Kasich headed straight for behind the counter, where staff wrapped an apron around his waist and had him serve patrons - most of whom mispronounced his last name.

"It tastes extra good because it's free," Kasich said, as he served pizza slices on paper plates, directing people to pay for their slice at the cash register.

One recipient handed their slice back to Kasich, asking him to put the cold slice of plain pizza into the oven to be heated up.

"With these kinds of sensitive hands, you think I would have been a surgeon," Kasich joked to the crowd that had gathered to be served by him.

Soon after he departed, one New Yorker wandered into the restaurant.

"Is there still free pizza being served?" he asked reporters.