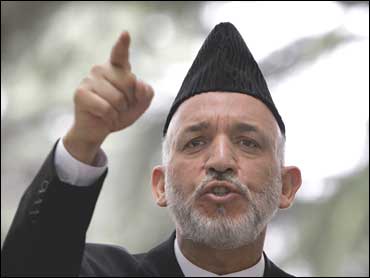 Afghan President Hamid Karzai threatened Sunday to send Afghan troops across the border to fight militants in Pakistan, a forceful warning to insurgents and the Pakistani government that his country is fed up with cross-border attacks.

Karzai said that Afghanistan has the right to self-defense, and because militants cross over from Pakistan "to come and kill Afghan and kill coalition troops, it exactly gives us the right to do the same."

"Therefore, Baitullah Mehsud should know that we will go after him now and hit him in his house," Karzai said, referring to Pakistan's top Taliban leader suspected in last year's assassination of former Pakistani Prime Minister Benazir Bhutto.

"And the other fellow, (Taliban leader) Mullah Omar of Pakistan should know the same," Karzai continued. "This is a two-way road in this case, and Afghans are good at the two-way road journey. We will complete the journey and we will get them and we will defeat them. We will avenge all that they have done to Afghanistan for the past so many years."

Neither government officials nor a spokesman for the Taliban in Pakistan could immediately be reached for comment.

Although Karzai in the past had accused Pakistan of not doing enough to stop militants crossing the border and launching attacks against Afghan and International forces in Afghanistan, it was first time he had threatened to send troops to hunt down militants in Pakistani territory, reports CBS News' Fazul Rahim in Kabul.

Karzai's comments come just two days after a very coordinated attack on the Sarposa prison in the southern city of Kandahar, in which militants set free almost 1,000 inmates, including about 400 Taliban militants. The Taliban claimed responsibility for the attack.

After the April 27 assassination attempt on the president at a ceremony celebrating the 15th anniversary of independence from Soviet invaders (three people including a lawmaker were killed), the attack on the Kandahar prison was the biggest of its kind. It was also a huge setback for the fragile government of Karzai and the international forces who are struggling to defeat a growing insurgency in the south and east of the country bordering Pakistan.

The attack shows "on one hand shows how weak the Afghan security institutions are and on the other hand it shows that the enemy is getting stronger and using more comprehensive techniques while conducting their operations," said Lt. Gen. Hilaluddin Hilal, former deputy minister of interior and the vice chairman of national security committee of the parliament.

In an interview with CBS News, Gen. Hilal added, "It is not in the interest of Afghanistan to send troops to another country. We do not have the capability to do so, and it would create more problems for Afghanistan and will give the militants a very good propaganda ground to recruit more insurgents.

"It is the job of NATO and American-led coalition forces to fight terrorists and militancy outside Afghanistan because they have the U.N. mandate and backing of international community," Gen. Hilal said.

This year's fighting has so far been the bloodiest, with a 60 percent increase in attacks on Afghan and International forces, according to Afghanistan's Ministry of Interior. The British forces' casualties exceed 100, and for the first time since 2003 the American forces' casualties in Afghanistan exceeded their casualties in Iraq last month. Four U.S. service members were killed and one injured when a roadside bomb hit their convoy in the western province of Farah yesterday, while several militants were killed in separate clashes with Afghan and coalition forces in Helmand and Kandahar today, U.S.-led forces said in a statement.

U.S. officials have increased their warnings in recent weeks that the Afghan conflict will drag on for years unless militant safe havens in Pakistan are taken out. Military officials say that counterinsurgency campaigns are extremely difficult to win when militants have safe areas where they can train, recruit and stockpile supplies.

Karzai said most of the fighters in recent fighting in the Garmser district of Helmand province - where hundreds of U.S. Marines have been battling insurgents the last two months - came from Pakistan.

His comments come as Pakistan is seeking peace deals with militants along its borders, including with Mehsud.

The deals have been criticized by U.S. officials, who warned they will simply give militants time to regroup and intensify attacks inside Afghanistan. But Pakistan insists it is not negotiating with "terrorists," rather militants willing to lay down their arms.

Of particular concern is whether the deals will address militant activity inside Afghanistan.

Mehsud, who is based mainly in the South Waziristan tribal area, has said he would continue to send fighters to battle U.S. forces in Afghanistan even as he seeks peace with Pakistan.

U.S. and NATO commanders said that following the peace agreements this spring, attacks have risen in the eastern area of Afghanistan along the border.

The U.S.-led coalition in Afghanistan says more than 15 insurgents have been killed by Afghan army and coalition forces in the southern province of Kandahar.

The deaths came during a search for escaped prisoners.

The U.S. says it has not been confirmed that any of the 15 were escaped prisoners. Five militants were also taken into custody during the Saturday operation.

Afghan officials say that 870 prisoners escaped from the Kandahar prison during a coordinated assault on the facility by dozens of Taliban militants late Friday.