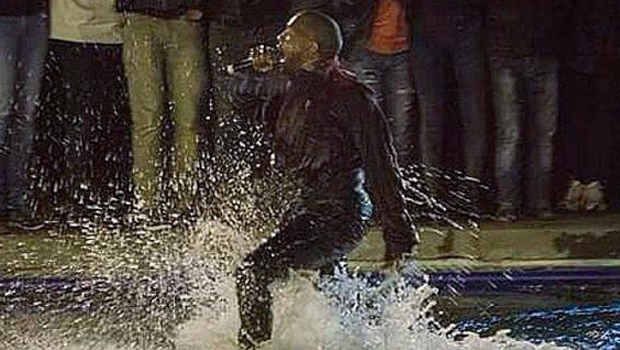 Kanye West tends to makes a splash wherever he goes. And this time it was an actual splash.

The rapper staged an impromptu free show Sunday in Armenia, where he's been traveling with wife Kim Kardashian -- and managed to get the gig shut down.

While performing in the Armenian capital of Yerevan, West decided to jump in a lake. Yes, pictures and video footage show West rapping and wading in Swan Lake.

Dozens of fans are seen jumping in to join him, and before too long, the gig gets shut down.

Hey, at least there's some great footage and pictures. And Kardashian, for one, got a real kick out of it.

West and Kardashian have been in Armenia, where the Kardashian family traces its roots. The trip continues Monday with a visit to Israel.