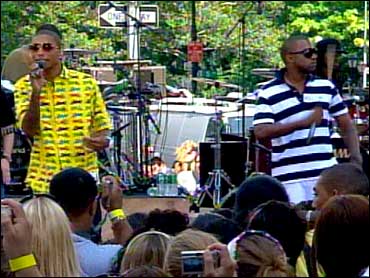 Singers and record producers Kanye West and Pharrell Williams may compete with each other, but they also support one another, and team in a new single by Pharrell. They speak about their relationship, and perform, on The Early Show.

Hip-hop giants Kanye West and Pharrell Williams have a lot in common.

They are award-winning record producers and highly successful recording artists. And they both have a sharp eye for fashion.

The two also join forces on Pharrell's hot new single "Number One," from his debut CD, "In My Mind."

On The Early Show plaza Wednesday, Dave Price asked them if how competitive they are, saying, "You're trying to sell albums, you know, against one another. Is there that sense of competition?"

"I guess it's like (NBA superstars Michael) Jordan and (Larry) Byrd back in the days, or something," West agreed. "It's not a rivalry, but the fact that there is somebody so good in the game that comes with a record just makes you scrunch your face up. And him knowing that it's somebody else like that in the game, I'm waiting to hear his new joint so I can get inspired to go in the studio."

"So you guys are pushing each other, basically?" Price wondered.

They even got into a friendly competition over whose outfit was more attractive, with audience members as judges.

To see the interview, .

To see them perform "Number One," .