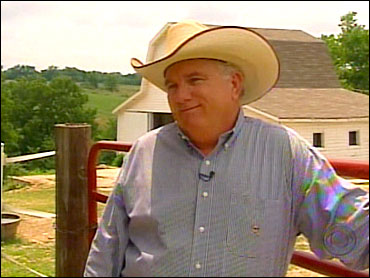 Kansas City, Mo. is a different type of city. It's the kind of town that can please any type of cowboy –- urban or not.

Kansas City started as a frontier town. It was the last stop before pioneers headed out toward the horizon and into the unexplored American West. After the Civil War, railroads were built and the livestock industry began to thrive. For more than a century, the stockyard business there boomed.

But as The Early Show discovered, the stockyards have gone by the wayside for a more sophisticated type of town.

Kansas City historian Monroe Dodd believes that the previous success of the agricultural economy paved the way for a more urban area, despite what the common perception may be.

"There are some people in town who think it's a little more cosmopolitan, a little more worldly not to be agriculturally based," he says. "But the fact is that Kansas City's growth came from agriculture, and a lot of its economy is still based on agricultural things."

One of Kansas City's staples is Bichelmeyer's Meat Company. Bichelmeyer's grew out of the original rural roots, and it remains a family-run business. It is one of the largest butcher shops in the country.

Troy Black is a regular customer at Bichelmeyer's. Black is a professional barbecue competitor, so he takes his meats very seriously.

Bichelmeyer's "is the first place I go to purchase my meats. For a competition, the most important thing I can do as a competitor is find really high quality meat," Black says.

Black is also on the board of directors of the Kansas City Barbecue Society and is convinced that Kansas City's meat is some of the best in the country. "Nowhere in the country can you get better (beef) brisket than in Kansas City," he says. "We're in Cowtown!"

At Oklahoma Joe's, the line for brisket and ribs never stops. It is one of more tha 100 barbecue restaurants in the Kansas City area. The city has more barbecue per capita than any other.

Kansas City is not without its own aesthetic beauty, either. The city is said to have more fountains than any other city in the world except Rome. It also has museums, galleries, restaurants and high-end boutiques.

For its residents, Kansas City has all the convenience of the big city with the charm of a small town.

Kansas City may be one of the top places for barbecue in all of America, but there's also a much more sophisticated food scene there, one that's thriving, with much more to offer than barbeque brisket and ribs.

It has lots of small food and beverage producers, and a huge variety of restaurants.

Among the items she showed Dave Price on Friday: a crudo plate of Japanese hamachi with litchi granite, bourbon infused with cinnamon, apple and vanilla, local cheeses, artisanal breads that rival loaves in Paris or New York, and fancy, beautiful chocolates.

Infused Bourbon from 12 Baltimore at the Hotel Phillips
www.hotelphillips.com

Fervere in KC has artisanal breads that rival that in New York City or Paris.
http://www.fervere.com/

From Bluestem, the crudo plate of Japanese hamachi with litchi granite.
www.bluestemkc.com

Food & Wine magazine is a partner in The Early Show's "Summer in the City" tour. For more on what to do in the cities on the tour, go to this page in Food & Wine. To recommend a chef in your city, and vote on Food & Wine's top picks, click here.