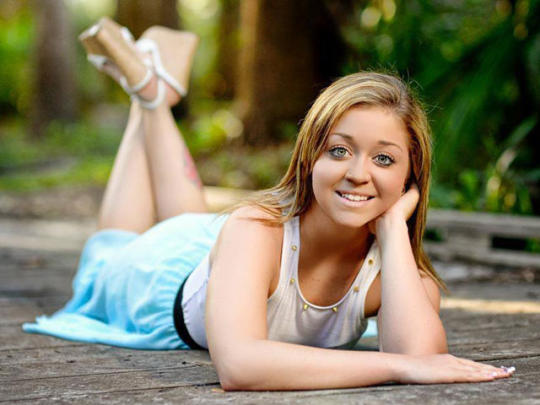 (CBS/AP) SEBASTIAN, Fla. - Kaitlyn Hunt, an 18-year-old Florida high school student who was arrested and charged over a same-sex relationship with an underage classmate, broke her silence in a news conference Wednesday night and expressed how the charges have affected her.

"I'm scared of losing the rest of my life, not being able to go to college, and be around kids, and my sisters, and my family," Hunt told a group of reporters outside Sebastian River High School in Sebastian, Fla., where authorities say the relationship started.

At one point, when asked about the ordeal she is going through, Hunt broke down and clung to her parents.

Hunt has been expelled from her high school and was charged in February with two counts of lewd and lascivious battery of a child 12 to 16 years of age as a result of her relationship with a 14-year-old girl.

Since her arrest, the case has garnered national attention for what some say is a gay rights issue.

"This is a life sentence for behavior by teenagers that is all too common--whether they are male or female, gay or straight - high school relationships may be fleeting, but felony convictions are forever," Hunt's attorney, Julia Graves, said in the news conference.

Hunt played on the basketball team with her younger girlfriend and shared the same circle of friends, Hunt's mother, Kelley Hunt Smith, has said. The two had a consenting relationship that began soon after Kaitlyn Hunt turned 18, and Hunt Smith said she assumed the younger girl's parents knew that.

Kaitlyn's father has also publicly claimed that the girlfriend's parents went to police because they blamed Kaitlyn for their child's homosexuality.

"For someone who is an honor student, a cheerleader, played varsity basketball, [and has] never been in trouble - it just seems extremely inappropriate to push the felony charges," Graves said in the news conference.

Hunt has until Friday to accept a plea deal offered by prosecutors that would allow her to avoid registering as a sex offender if she pleads guilty to lesser charges of child abuse. State Attorney Bruce Colton said he would recommend two years of house arrest followed by one year probation if she takes the deal.

If she is found guilty, it's also possible that Hunt could apply to not have to register as a sex offender under a "Romeo and Juliet" law because the girls were no more than four years apart in age, Colton said.

While Colton said the victim's family is not pushing for prison, he said they do want Kaitlyn Hunt to be held responsible in some way. The Hunt family said they would accept a plea deal only if the charges are dropped to a misdemeanor.

According to CBS affiliate WPEC, the mother of the alleged victim says she is just a mom protecting her daughter and that it is not a gay rights issue.

While some argue that Hunt is being persecuted because she is gay, Colton insists the case would not be treated any differently if the underage relationship had been between an older boy and a younger girl or an older girl and a younger boy.

Kaitlyn's parents say they wish it didn't have to come to this. They wish it could have been settled privately, between their family and the family of Kaitlyn's alleged victim. They never wanted this to turn into a criminal issue.

"It's nothing I would ever hope for anybody else and I just thank you from a mother's heart. Thank you for standing up for Kaitlyn," Kelly Hunt Smith, Kaitlyn's mother, said in the news conference.