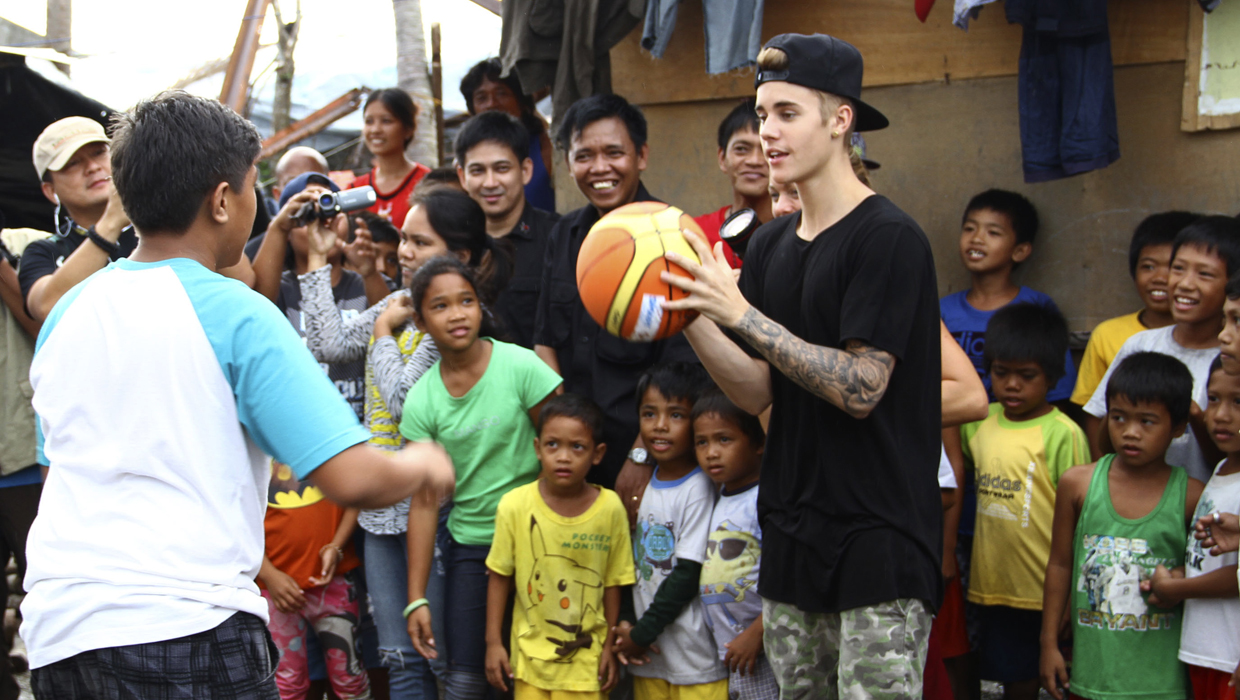 Teen heartthrob Justin Bieber visited young victims of Typhoon Haiyan on Tuesday, traveling to the Philippines after launching a worldwide campaign to help those affected by the deadly storm.

Bieber arrived from Australia and flew to Tacloban, the devastated capital of central Leyte province, where he distributed shirts, toys and basketballs to children.

The 19-year-old pop star visited a Tacloban elementary school that is being used as an evacuation center despite being heavily damaged by last month's typhoon, which left nearly 6,000 people dead and more than 1,700 others missing, and flattened entire towns and villages in the central Philippines.

"It was like we were not hit by the typhoon, like Yolanda never came," one girl told Manila's TV5 Television, describing her feelings on seeing her idol. Typhoon Haiyan is known locally as Yolanda.

Bieber took a quick walk around the school and checked a temporary learning space that was packed with about 300 children, including some from the local neighborhood, before moving to an outdoor stage to sing, said Kate Donovan, a spokeswoman for UNICEF.

"He played a very beautiful set," she said. "He played a series of Christmas songs and some of his hits as well, including `Baby.'"

At another school also used as temporary shelter, Bieber played basketball with some boys and posed gamely for pictures with his fans.

"Justin brought a lot of joy, hope and cheer to the hundreds of children who were there," Angela Kearney, UNICEF's emergency coordinator for Haiyan response, said in a statement.

Kearney said the money Bieber raises "will give some of the children who were caught in the path of Haiyan access to education, vaccinations, better nutrition, clean water and sanitation."

In a video posted on the fundraising platform Prizeo, Bieber asked fans to help him support victims of Typhoon Haiyan.

Bieber is one of the several foreign and local celebrities and VIPs who have helped recovery efforts.

Grammy-winning singer Alicia Keys visited an air force base in Manila two weeks ago and distributed crayons and coloring books to children of families who arrived aboard mercy flights by the Philippine and U.S. military from the typhoon-ravaged provinces of Leyte and Samar. The R&B star was in Manila at the time for a concert.

Bieber said donors have a chance to win a prize to hang out with him in a studio while he works on his upcoming album.

"The moment I heard about the tragedy a few weeks back, I thought I can count on you guys to make a difference," Bieber said.

Bieber, meanwhile, released the single "Confident" on Monday. The same day, he chatted with radio host Ryan Seacrest, saying, "People don't get to see me living as a 19-year-old boy…I'm still finding myself and when I have the media attacking me every day it's no [different] than bullying that happens in school."