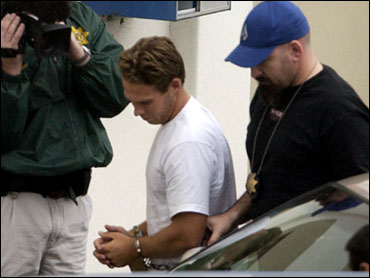 SANTA BARBARA, Calif. (CBS/AP) Jurors recommended a life sentence Wednesday for Jesse James Hollywood for orchestrating the kidnap-murder of a 15-year-old boy – a crime that inspired the movie "Alpha Dog."

Jurors deliberated about two days before recommending life without the possibility of parole instead of a death sentence. The judge is scheduled to formally sentence Hollywood Oct. 21.

Hollywood was convicted last week of the first-degree murder and kidnapping of Nicholas Markowitz in August 2000, over what prosecutors say was a drug debt owed by Markowitz's half-brother.

The victim's mother, Susan Markowitz, said she was comfortable with the jury's decision.

"As a mother I would not be thrilled or relieved that he received the death penalty," she said outside court. "Another son dying is not going to make me feel good in any way."

Hollywood also was found guilty of being a principal in a murder committed in the course of a kidnapping, and being involved in a crime in which an assault weapon or machine gun was used, "special circumstances" which made him eligible for the death penalty.

"We're gratified that the jury came back with life instead of death," said defense attorney James Blatt, who plans to file a motion for a new trial.

Hollywood is "relieved that he won't be going to death row. He is also determined to prove his innocence. We believe strongly he did not commit this murder," Blatt said.

Blatt added that jurors left immediately after the verdict was read and did not speak to prosecutors, the defense team or reporters.

Deputy District Attorney Joshua Lynn said he was pleased with the verdict and maintained Hollywood was responsible for the slaying.

"If you order a killing you are as guilty as the killer," Lynn said.

The case drew national interest because of the brazen daylight kidnapping of Nicholas, his murder and Hollywood's notorious name.

It captured the attention of the entertainment industry, which made the 2007 movie "Alpha Dog," with Bruce Willis and Emile Hirsch, who played "Johnny Truelove," a character based on Hollywood. Blatt claimed it was the first case ever in the U.S. where a movie about an alleged crime was released prior to trial.

Hollywood, who took the stand in his own defense, said he was afraid of Ben Markowitz after he left threatening messages, poisoned his dog and broke a window at his home — only hours before Nicholas was abducted. Hollywood also said the debt was $2,500.

Hollywood called the taking of Nicholas irrational and not well-thought out. However, he claimed he didn't order the teen's murder nor was he present when the teen was shot and buried in a shallow grave in the hills above Santa Barbara.

Hollywood said Ryan Hoyt, the gunman who was convicted and sentenced to death, acted on his own because of concern about Ben Markowitz finding out about the abduction. Hollywood also said the gun used to kill Nicholas was once his, but he gave it to Hoyt months before the murder.

Hollywood said he was stunned when Hoyt told him the teen was killed.

"I said, 'You gotta be kidding me. What were you thinking?"' Hollywood testified.

Prosecutors did not call Hoyt as a witness, though he was the one person who could definitely say if Hollywood ordered the slaying. Lynn said he opted not to put Hoyt on the stand because he would invoke his Fifth Amendment right against self-incrimination since his case is under appeal.

Lynn said in his closing argument that Hollywood liked to have other people do his dirty work for him.

The prosecution contends that Hollywood ordered the boy's death because an attorney had informed him that he could face a life sentence for kidnapping.

Hollywood fled after the slaying and testified he lived in Colorado, the Mojave Desert and various parts of Canada before he was captured in Brazil in 2005.

The case stalled for years after it was learned that Deputy District Attorney Ron Zonen had turned over probation reports, police files and other documents to "Alpha Dog" director Nick Cassavetes.

Zonen said in court documents that he gave the files to Cassavetes to help publicize the hunt for Hollywood. An appeals court removed Zonen from the case, but the state's highest court and the U.S. Supreme Court eventually ruled that he and the district attorney's office could stay on the case.

However, Lynn was assigned to try Hollywood.