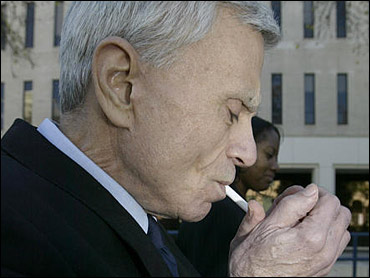 A jury of seven men and five women was selected Wednesday to decide whether actor Robert Blake murdered his wife, Bonny Lee Bakley.

The panel was selected and sworn in after a prosecutor and defense attorney used numerous challenges to remove potential jurors from the jury box. They did not have to state a reason for the peremptory challenges.

The panel was ordered to return Monday morning for opening statements. In the interim, Superior Court Judge Darlene Schempp plans to hold hearings on motions.

Bakley was shot May 4, 2001, in a car near a restaurant where she and Blake had just dined. Blake, 71, star of the old "Baretta" TV series, had married her after DNA tests showed he was the father of her baby.

Blake pleaded not guilty to murder and solicitation of murder. He is free on $1.5 million bail, but confined to home.

The final selection came after two weeks of individual questioning of prospective jurors who were warned by the prosecutor that the case against Blake is entirely circumstantial.

In the lengthy juror-selection process, Prosecutor Shellie Samuels also warned prospective jurors they would hear that the actor's slain wife was "not Mother Teresa" and that some people may have thought she deserved to be killed.

Prosecutor repeatedly asked the potential jurors Tuesday if they could convict Blake even if they wind up disliking Bonny Lee Bakley.

"If you really thought she was a scuzz, could you still convict him of killing her?" she asked one man.

"If the facts showed he killed her, I could," said the man, who was retained for the jury pool.

To another prospective juror, Samuels declared: "There will be evidence in this case that Bonny Bakley was not Mother Teresa. She had quite a bit of baggage, an unsavory person, she was scummy."

Samuels also told the prospective jurors that she will be presenting only circumstantial evidence. She said there were no fingerprints, no DNA and no eyewitnesses.

Prospective jurors were asked Monday if they could endure the public scrutiny that surrounded jurors in the O.J. Simpson and Scott Peterson cases, and the answers were mixed.

"I would rather not be a juror," said one woman. "I would prefer not to be in the limelight. But whatever happens will happen. I could be unprejudiced."

A young woman confronted with the same question was unfazed.

"I am not easily influenced by the media," she said. It is unclear whether either of these women were chosen to be part of the jury.

The jurors ranged from the very young to the old, with a number of middle-age panelists.

Schempp told them it is important that they avoid exposure to publicity about the case, leaving the room if something comes on television and asking family members to clip their newspapers.

The trial is estimated to last about five months.