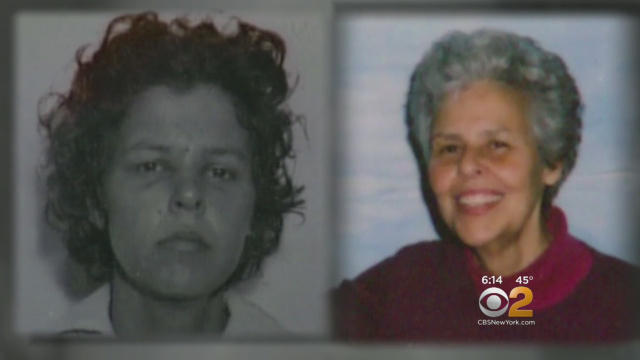 ALBANY, N.Y. -- A former radical who drove a getaway car during a Brinks armored car robbery that led to the deaths of two police officers and a security guard has been denied parole.

The New York state Parole Board denied Judith Clark’s bid for parole on Friday even after Democratic Gov. Andrew Cuomo met with Clark in prison and made the decision to commute her sentence.

Clark has served 35 years of a maximum 75-year sentence for her role in the 1981 robbery.

Gov. Andrew Cuomo granted Clark clemency this past New Year’s Eve, CBS New York reports. She had been sentenced to 75 years to life in prison for being the getaway driver in the Oct. 20. 1981 doomed armored truck heist. The governor reduced her sentence to 35 years to life to give her a chance at parole.

In a 2002 sworn statement, she expressed regret and said she had rejected her radical beliefs. Behind bars, she has helped found an HIV/AIDS education program and done other charitable work.

But law enforcement groups opposed Clark’s release, and Republican state senators said nearly 10,000 people signed a petition urging the state Board of Parole to keep her locked up.

A spokeswoman for Cuomo said the governor respects the parole board’s decision.

The New York State Parole Board said it commended Clark’s “personal growth and productive use at time,” CBS New York reports. But the board also said it must consider whether someone’s release “is release is not incompatible with the welfare of society and will not so deprecate the seriousness of (their) crimes as to undermine respect for the law.”

The board ruled that Clark failed that test.

The Parole Board noted that Clark – a University of Chicago graduate who was arrested in the 1969 “Days of Rage” protests in Chicago – had a prior criminal history in Illinois of aggravated battery, aiding escape and mob action. The board said Clark was “attracted to violence to demonstrate total commitment to revolutionary ideas” for more than a decade between her 20s and 30s.

“By the time of the crime, you were not a ‘young idealistic innocent, by any means,’” the board said. “In fact, you described yourself as a ‘singleminded fanatic… at war with America,’ a ‘blinded revolutionary,’ ‘cut off’ from your ‘humanity.’”

At the time of the Brinks heist, Clark was a member of the Weather Underground, CBS New York reported in January. The Weather Underground was a 1960s group of increasingly violent anti-war activists. Clark called herself a freedom fighter, insisted on representing herself at trial and then refused to go to court, remaining in a cell.

The group involved in the robbery claimed to be “appropriating” funds in Nyack – in a bloody failure that left Brinks security guard Peter Paige injured, and police officers Waverly Brown and Edward O’Grady II dead.

The Parole Board said Clark described the 1981 crimes as “policeman completely out-gunned, out-maneuvered and overwhelmed by people intent on killing them,” and said she admitted she never questioned her participation “before, during, or for a significant period after the crime” and only felt remorse and shame years later.

Further, the Parole Board said while Clark participated in programs while incarcerated, she also corresponded with people she described as “fugitives” and received two years in special housing from 1985 until 1987 “for giving descriptions of the correctional facility to these persons to ‘break’ you out.”

The board noted that Clark went on to earn her bachelor’s and master’s degrees in prison, received clinical pastoral education, and worked with mothers and their children within the correctional facility. The board also noted that Clark later did feel remorse for her acts and came to understand that at “the center of this story and tragedy, and all the years since, are the families” of the victims.

The board also said it has not departed from a favorable risk assessment for Clark, but still, her crimes were too serious for her to be released.

“(W)e do find that your release at this time is incompatible with the welfare of society as expressed directly by relevant officials and thousands of its members, and that it would deprecate the seriousness of your crimes as to undermine respect for the law,” the board said. “You are still a symbol of violent and terroristic crime.”

Clark’s daughter, Harriet, said she believed her mother should be allowed to come home.

“My mother did not kill anyone and it’s hard for me to understand who is served by making her die in prison, which is what decisions like this eventually amount to,” Harriet Clark said in a statement. “The Parole Board sent a discouraging message today to people on the inside and their families on the outside so I want to send a different message and say how proud I am of the men and women I know inside who work so hard to transform their lives and who, like my mother, deserve to come home to their families.”

As with any Parole Board decision, Clark may appeal the ruling and reappear before the Parole Board in the future, the New York State Department of Corrections said.

Clark’s next scheduled appearance before the Parole Board is in 2019.