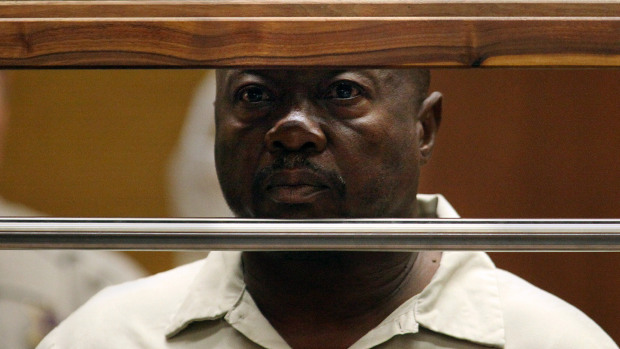 LOS ANGELES - A judge has set a trial date for a man charged with 10 counts of murder in what have been dubbed the "Grim Sleeper" serial killings that spanned two decades in Los Angeles.

Superior Court Judge Kathleen Kennedy said Friday that jury selection would begin June 30 in the case of Lonnie Franklin Jr., who has pleaded not guilty.

Anguished family members pleaded to move the case forward after years of delays. They angrily denounced the defendant and blamed his lawyer for dragging his feet.

Defense lawyer Seymour Amster agreed to a June date after prosecutors said they would be ready to argue about evidence at a March hearing.

Prosecutors cited Marsy's Law, a voter-approved victims' bill of rights that extends the right to a speedy trial - guaranteed for defendants - to family members of victims. It also allows victims to address the court, and Porter Alexander, who spent more than 20 years wondering if his daughter's killer would ever be caught, was among those who addressed the court.

"Oh, man, I can't count how many times I've been there," the 74-year-old said Thursday.

Franklin, 62, has pleaded not guilty to 10 counts of murder and one count of attempted murder and could face the death penalty if convicted of the shootings and strangulations that occurred from 1985 to 2007, the brunt of them during a period when crack cocaine plagued parts of Los Angeles. The nickname was coined because of the gap between slayings in 1988 and 2002.

Police arrested Franklin in July 2010 after his DNA was connected to more than a dozen crime scenes. They had linked the crimes, but didn't have a suspect until a crime lab computer traced the sample to one of Franklin's family members.

An officer posing as a busboy at a pizza parlor got DNA samples from dishes and utensils Franklin had been eating with at a birthday party.

For cases that go cold for so many years, the court process can languish. It's not unusual for capital cases to take years to complete, but Marsy's Law, passed by voters in 2008, gives victims some leverage in speeding things up, though it's still not widely used, said attorney Nina Salarno Ashford, a board member of Crime Victims United.

The law allows victims to be heard at bail hearings, parole hearings and sentencing, which used to only happen at the discretion of the judge.

Salarno Ashford, whose sister was murdered in 1979, has used the law to represent victims throughout the process, including cross-examining witnesses at trial, and she has successfully argued three times to have trial dates set so the victims could have their day in court.

"It's always been a fault in our system that defendants were able to play a shell game and delay things," she said.

Deputy District Attorney Beth Silverman said the case has been plagued by delays with no end in sight and that the judge has failed to hold the defense to strict deadlines to complete their investigation.

Defense lawyer Seymour Amster blamed the prosecution. He said his expert found DNA from another man at three of the crime scenes and is seeking to test more material because the evidence could help his client. He said the prosecution has opposed releasing the items for testing and have asked for more time to prepare their response.

"There are rumors that I'm trying to delay this thing," he said. "I'm really not. I'm a strong proponent of do it once, do it right."

Silverman said that she recognizes the need to balance Franklin's right to prepare for trial but that the court must balance that with the rights of the victims and the community. She said those rights have already been compromised.

A firearms expert who tested guns retired last year, so the testing needed to be done again. Medical examiners and a supervising criminalist at the coroner's office have retired and will need to be replaced. And the mother of victim Mary Lowe died more than two years ago, depriving her of the chance Alexander and other victims' families will have to address the court.

"It's a waiting game," said Alexander, whose 18-year-old daughter, Monique, was killed in 1988. "I need to keep up my strength. I hope I'm here for the ending."