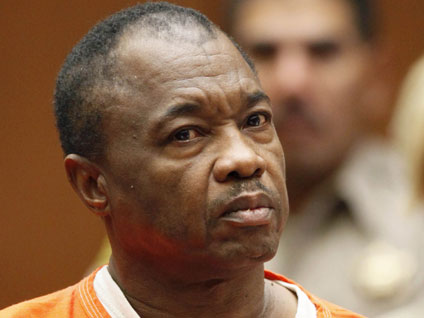 Franklin, 57, was known in his South Los Angeles community as the 'neighborhood mechanic, but he was arrested last month at his home after police say DNA linked him to the series of murders committed between 1985 and 2007.

Franklin was charged with 10 counts of murder, one count of attempted murder and special circumstance allegations of numerous murders that could qualify him for the death penalty if convicted, said CBS affiliate KCAL.

Court records indicate that Los Angeles police seized hundreds of items from Franklin's home and vehicles including guns, ammunition and handcuffs, but last month police said that none of the items have tied Franklin to the killings although authorities continue to conduct DNA and ballistic tests.

Police pursued Franklin after his son was arrested and swabbed for DNA. Using a controversial method known as a familial DNA search, the sample was identified as similar to evidence found in the series of killings, giving investigators the lead they were desperately looking for.

Police reportedly gathered a sample from the alleged killer off a slice of discarded pizza, according to The Los Angeles Times. Detectives also swabbed a cup used by Lonnie Franklin Jr. at a restaurant and confirmed his DNA matched that in the serial killings, police said.

More than 30 detectives investigated the murders in the 1980s, but after a few years leads became scarce. Detectives built a special squad after the June 2007 "Grim Sleeper" slaying of 25-year-old Janecia Peters, whose body was found shot in a trash can.

The killer was called the "Grim Sleeper" because he took a 14-year break in his crimes. Police are also investigating more than 30 other cold case files that may link Franklin to other unsolved murders.

Prosecutors have not decided whether they will seek the death penalty.