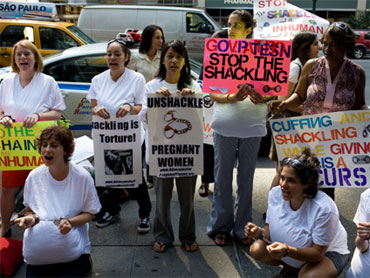 (CBS/AP) NASHVILLE, Tenn. - Nashville officials have agreed to pay a $490,000 settlement to Juana Villegas, an immigrant in the United States illegally who was shackled to a hospital bed during labor after being arrested during a traffic stop.

The Metro Council approved the agreement Tuesday to end the five-year long lawsuit brought by Villegas.

The case turned the national spotlight on Davidson County Sheriff Daron Hall's enforcement of a federal deportation law, which is no longer enforced in the county.

Villegas was the subject of deportation proceedings when she went into labor in July 2008. She gave birth while shackled to a bed, and according to the New York Times, she developed an infection after not being allowed to bring a breast pump into detention after the delivery.

Villegas will receive $100,000 from the settlement, with the remainder going to attorneys' fees. The Times reports that the federal judge in the case has urged immigration authorities to provide Villegas a special visa that is generally offered to crime victims. The judge said the visa was in order because of the violation of Villegas's civil rights, reports the paper.

In 2011, the same judge ruled jail officers had shown "deliberate indifference" to Villegas' medical needs by cuffing her ankle to her hospital bed throughout most of her labor and during recovery, according to the Times.

In September 2008, the Davidson County sheriff reportedly issued a new policy ending the shackling of pregnant women in detention.

According to the ACLU, 24 states currently restrict the use of restraints on pregnant women during labor and delivery.

Texas woman accused of kidnapping migrant baby and holding him for ransom
Thanks for reading CBS NEWS.
Create your free account or log in
for more features.
View CBS News In
CBS News App Open
Chrome Safari Continue
Be the first to know
Get browser notifications for breaking news, live events, and exclusive reporting.