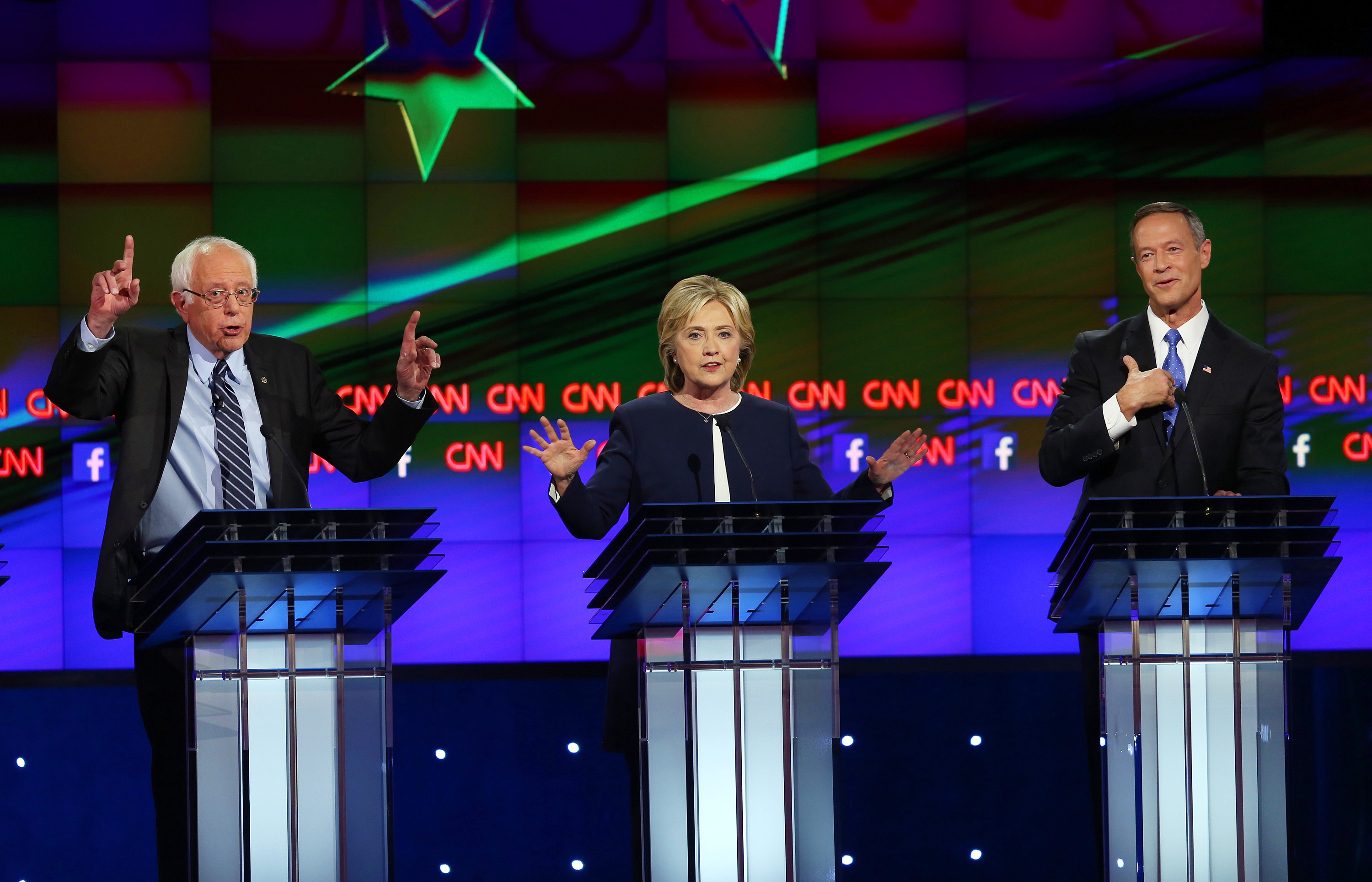 The three remaining Democratic presidential contenders are getting ready for one of the key events of the Iowa campaign, the Jefferson-Jackson dinner.

Packed with over 6,000 people, the event on Saturday night is widely considered to mark the moment when Iowa Democrats really start paying attention to the candidates. It is loud, raucous, and it takes a certain talent for candidates to win the night, as supporters for each candidate roar their approval and disapproval.

The 2007 speech Barack Obama made there was masterful - inspiring his audience, while at the same time suggesting his main unnamed opponent, Hillary Clinton, was a poll-driven, triangulating, Washington insider:

This party - the party of Jefferson and Jackson; of Roosevelt and Kennedy - has always made the biggest difference in the lives of the American people when we led, not by polls, but by principle; not by calculation, but by conviction; when we summoned the entire nation to a common purpose - a higher purpose. And I run for the Presidency of the United States of America because that's the party America needs us to be right now.

The Obama campaign had historic ground operations Iowa yet that speech was credited with fueling Mr. Obama's rise in the state before the 2008 caucuses. Candidates this cycle - including the target of his speech then, Hillary Clinton - hope for a similar impact this time around.

"This is probably the last big event before the caucus. The debates will mean something, but I don't think they will get the same activist Iowa scrutiny that we will see on Saturday night," explains Scott Brennan, former Chair of the Iowa Democratic Party.

Come Saturday, there will be exactly 100 days until the Iowa caucuses. While every day now is critical for campaign messaging, Iowa Democrats largely agree there is no other night like the Jefferson Jackson dinner -- candidates and their staffers know that they must leave a lasting impression to fuel their campaign over the next few months.

The campaigns are leaving little to chance, when it comes to creating an hyper-charged atmosphere that attracts voters.

"You are working to turn out thousands of folks," explains Brennan. Those folks won't come if they do not believe in a candidate or do not want to sit and "listen to politicians give speeches."

Candidates worked with the Iowa Democratic Party to buy tickets and get their supporters into the room. The Sanders campaign bought 1,950 tickets-- which will be distributed to their supporters for free -- meaning that almost one third of the room will definitely be cheering for Sanders. The other campaigns did not release the exact numbers of tickets they bought.

Fueling the fire is starting before the dinner this year, too, as the campaigns bring musical entertainment to the state. Sanders has a #FeelTheBern concert on Friday in Davenport Iowa, Clinton has a Katy Perry concert on Saturday in Des Moines and O'Malley will do some of his own serenading in Des Moines on Saturday.

Katy Perry is big, but it is quite possible that for this audience, it's Bill Clinton - who's also rallying with wife Hillary earlier on Saturday - who may be the bigger draw. He remains one of the most popular Democrats in the party.

"I just want to see Bill," exclaimed one Iowa voter on Thursday afternoon as her friends talked about how excited they were to see Katy Perry perform.

And the Clinton campaign is fully aware of the Bill Clinton effect.

"You're not going to find a more compelling advocate generally in politics, let alone for her and the kind of president she'd be. He's a tremendous resource. He's an enormous asset," explains Jen Palmieri.

Creating an aura of excitement is something other candidates have tried before. In 2003, Howard Dean was leading in the polls and his campaign bused supporters to the dinner.

"If you put on a real show and it looks like you got your act together that helps," Dean explains. "In Iowa they really want someone who is going to win the presidency. They are very pragmatic."

In 2003, Dean attracted attention more for the buses of his supporters descending on Des Moines than for his speech. That year, the night belonged to Kerry. He took veiled swipes at Dean's angry speechifying and overtook him in the Iowa polls within weeks.

Yet ultimately it is the speech that will light up the room draw in new support. Candidates have to step it up, explains Iowa Attorney General Tom Miller. Miller, who supported Obama in 2008 and is now a Clinton supporter, remembers Obama calling himself a fourth quarter player and that quality came to fruition at the dinner. "He had the confidence, had the energy and had enormous support in the crowd that reinforced him," Miller says. "It was amazing."

With Vice President Biden's decision not to get into the race, connecting to the crowd is even more important for the candidates this weekend, as they fight to win over his supporters.

"I do think it has made some people now free if they were waiting for Biden," explains Andy McGuire, Chair of the Iowa Democratic Party.

While many Biden supporters say they are "still in mourning," they are beginning to consider their options. This dinner will be the first time they see all of those options in front of them in their home state. Some say they are keeping their eyes on O'Malley -- a candidate they had not previously considered.

The Iowa Democratic party maintains that the night is anyone's to win. McGuire knows Iowans who walked into the 2007 Jefferson Jackson dinner supporting one candidate and left supporting another, and she expects the same thing to happen this year. She said, "It could be a night for a candidate to really take off and convince voters."