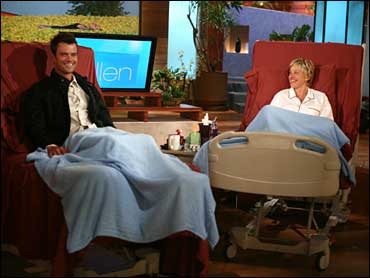 He may be a gorgeous Hollywood hunk, but "Las Vegas" star Josh Duhamel displayed all the skills of a pimply-faced high school freshman when he first met his current girlfriend, Fergie.

"Her friends had to talk her into going out with me," he tells Ellen DeGeneres in an interview airing on her talk show on May 7. "I had recently ended a relationship. I had said something in a magazine, just sort of joking."

Apparently, Duhamel told the magazine that he sometimes had naughty dreams about Fergie.

"I didn't even think they would print it," he told DeGeneres. "I was just screwing around. So they printed it, of course, and then I find out that the month the magazine is on the racks she was coming to do the show with The Black Eyed Peas. It was a little awkward."

"I had read in a magazine that he had a naughty dream about me," Fergie told Playboy in an article in this month's issue. "All my friends knew about him because he had been a soap opera star. I'm not into soap operas, but they told me, 'You gotta go out with him. Do it for the group. Take one for the team.'"

When they finally met on the set of "Las Vegas," Duhamel was so flustered that he couldn't think of what to say.

"You know what my come-on line was?" he told DeGeneres. "'You're hot.' I'm not kidding you. That's all I could come up with. And she said, 'I know. I heard what you said in the magazine.' … True story!"