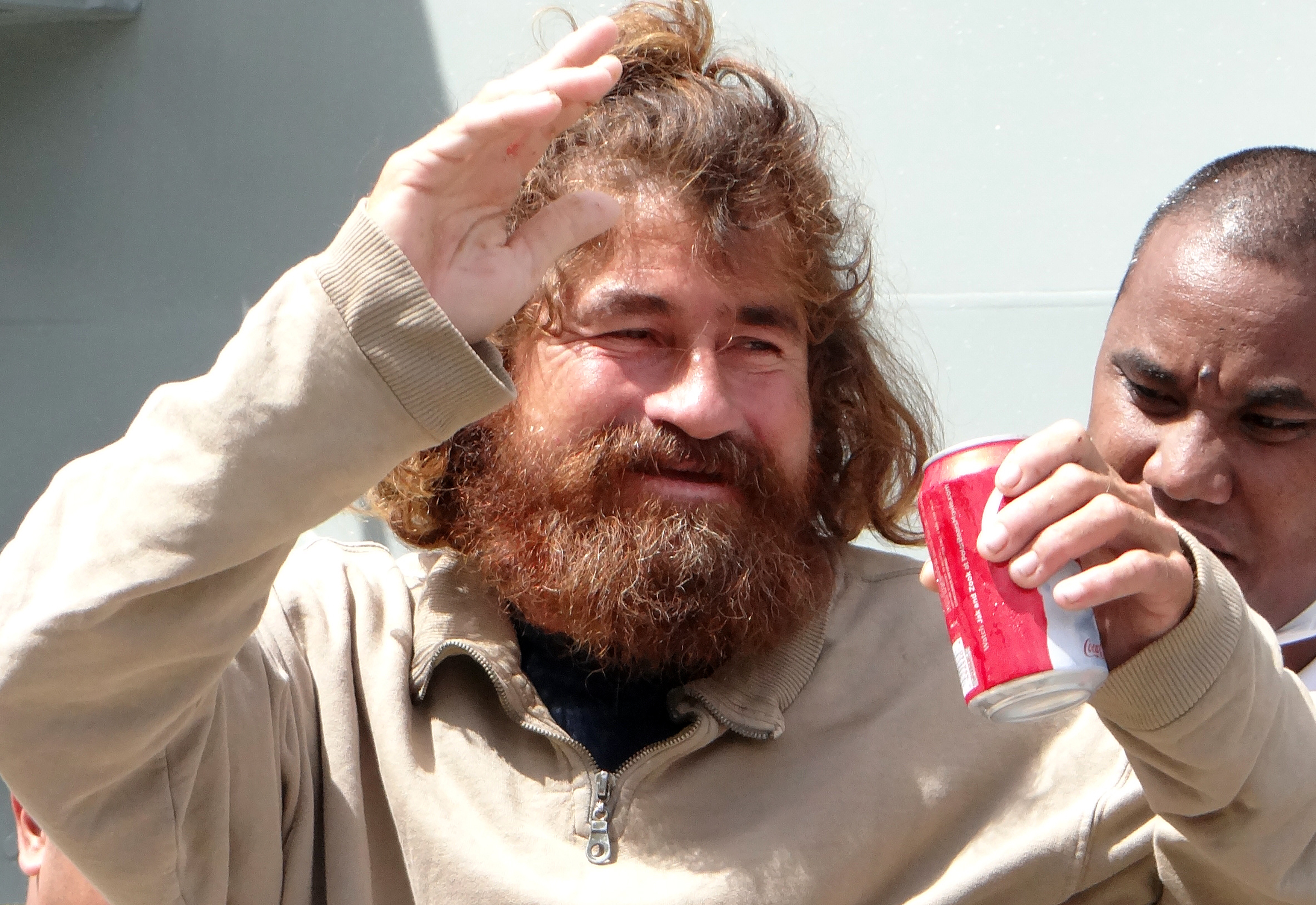 WELLINGTON, New Zealand -- It's a story that almost defies belief: A man leaves Mexico in December 2012 for a day of shark fishing and ends up surviving 13 months on fish, birds and turtles before washing ashore on the remote Marshall Islands some 5,500 miles away.

But that's the story a man identifying himself as 37-year-old Jose Salvador Alvarenga told the U.S. ambassador in the Marshall Islands and the nation's officials during a 30-minute meeting Monday before he was taken to a local hospital for monitoring. Alvarenga washed ashore on the tiny atoll of Ebon in the Pacific Ocean last week before being taken to the capital, Majuro, on Monday.

"It's hard for me to imagine someone surviving 13 months at sea," said Ambassador Tom Armbruster in Majuro. "But it's also hard to imagine how someone might arrive on Ebon out of the blue. Certainly this guy has had an ordeal, and has been at sea for some time."

Other officials were reacting cautiously to the Spanish-speaking man's story while they try to piece together more information. If true, the man's ordeal would rank among the greatest tales ever of survival at sea.

Armbruster said the soft-spoken man complained of joint pain Monday and had a limp but was able to walk. He had long hair and a beard, the ambassador said, and rather than appearing emaciated he looked puffy in places, including around his ankles. Otherwise, he added, Alvarenga seemed in reasonable health.

He's a native of El Salvador but has lived in Mexico for 15 years and fishes for a man he knows as Willie, catching sharks for 25 pesos ($1.90) per pound.

A storm blew the fishermen off course, and soon they were lost and adrift.

"He talked about scooping up little fish that swam alongside the boat and eating them raw," Armbruster said. "He also said he ate birds, and drank birds' blood."

After about a month, Ezekiel died, the survivor told officials.

Alvarenga also talked about eating turtles. Once near Ebon, he swam ashore.

"He thanked God, initially, that he had survived," the ambassador said. "He's very anxious to get back in touch with his employer, and also with the family of Ezekiel. That's his driving motivation at the moment."

Armbruster said the man said he had no family in Mexico but he does have three brothers who live in the U.S., although he could not immediately provide officials with contact details.

Gee Bing, the acting secretary of foreign affairs for the Marshall Islands, said he was somewhat skeptical of Alvarenga's account after meeting with him Monday.

"It does sound like an incredible story and I'm not sure if I believe his story," Bing said. "When we saw him, he was not really thin compared to other survivors in the past. I may have some doubts. Once we start communicating with where he's from, we'll be able to find out more information."

Bing said the man had no identification with him and other details of his story remained sketchy, including the exact location of his departure from Mexico.

The survivor's vital signs appeared good except that his blood pressure was a bit low, Bing said. After doctors give him the all-clear, Bing said, officials hope to repatriate him to Mexico or whatever country is appropriate. Bing said the Mexican ambassador in the Philippines, Julio Camarena, has been involved in the case. Camarena could not be contacted immediately.

Erik van Sebille, a Sydney-based oceanographer at the University of New South Wales, said there was a good chance a boat drifting off Mexico's west coast would eventually be carried by currents to the Marshall Islands. He said such a journey would typically take 18 months to two years depending on the winds and currents, although 13 months was possible.

"The way that the currents in the Pacific work is that there is a very strong westerly current just north of the equator and that basically drives you directly from Mexico all the way toward Indonesia and in the path, you go right over the Marshall Islands," he said.

There have been other cases of people surviving for months adrift in the Pacific. In a case with similarities, three Mexican shark fishermen in 2006 said they were lost at sea for nine months before being rescued near the Marshall Islands. In 1989, four men survived nearly four months in the Pacific Ocean near New Zealand after their multi-hulled boat capsized.

Orlene strengthens into hurricane off Mexico's coast
Thanks for reading CBS NEWS.
Create your free account or log in
for more features.
View CBS News In
CBS News App Open
Chrome Safari Continue
Be the first to know
Get browser notifications for breaking news, live events, and exclusive reporting.