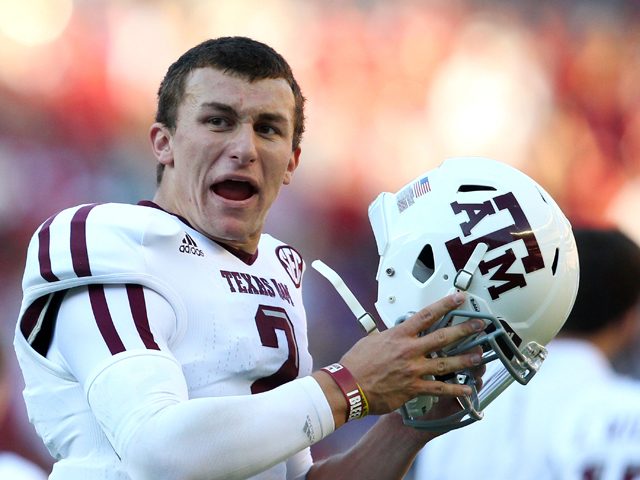 COLLEGE STATION, Texas In the 77-year history of the Heisman Trophy, no freshman has ever won the award.

Texas A&M's Johnny Manziel, the player who proved coach Kevin Sumlin's prolific offense could work in the SEC, may finally change that.

Manziel accumulated 4,600 yards of total offense and 43 touchdowns this season along with a signature win over then top-ranked Alabama to make him a front-runner for the Heisman.

In the past some voters have been reluctant to pick a freshman for the award. But those attitudes might be changing.

Oklahoma coach Bob Stoops coached Adrian Peterson in 2004 when he finished second in voting — still the highest finish ever for a freshman.

"A player is a player, it shouldn't matter what age he is," Stoops said.

Manziel spoke to the media for the second straight day Tuesday after not being available all season because Sumlin doesn't allow freshman to talk to the media. He danced around the question almost as deftly as he avoids defenders when scrambling out of the pocket when asked if he thought age should matter in Heisman voting.

"I've heard a lot about it and people have their different opinions on that," he said. "I just think that situation will play itself out. It goes to the most outstanding player in college football, if that happens to be me then that's something that I'll cherish for the rest of my life. If not, then that's just kind of how the cookie crumbles, I guess."

The other top freshman finishers in the history of the Heisman were Herschel Walker in 1980 and Michael Vick in 1999, who both came in third. Vick, like Manziel, was a redshirt freshman. Walker and Peterson were in their first seasons on campus.

CBSSports.com's Chris Huston says Manziel looks like "the sure-fire winner" of the Heisman based on his staggering stats and high-profile win.

"His 4,600 yards of total offense and 43 touchdowns combined with his team's win over No. 1 Alabama will be enough to put him over the top," Huston writes.

Manziel wasn't yet born when Walker had his fabulous freshman season and was just 6 years old when Vick wowed in his. But, Manziel who turns 20 next week, does recall Peterson's first year.

"I do remember Adrian Peterson at Oklahoma and the year he had and they still talk about it to this day," Manziel said. "People still remember his freshman year at Oklahoma that was something that was truly spectacular."

His success in what is widely considered the toughest football conference in the country is a big reason why some think his freshman status won't matter to voters.

"I don't think there's any reason not to vote for him, simply because he's a freshman," CBS Sports analyst Verne Lundquist said. "He's put up numbers this year that are astounding. Not only are the stats astounding, but his style of play is so compelling. I would not be surprised if he won, and I think he's probably earned it."

Some believe that Manziel could benefit from the fact that he's not a true freshman, but is in his second full year of college.

Tim Tebow became the first sophomore to win the award in 2007, starting a string of three straight sophomores to win it.

As for Manziel, he's still trying to grasp the fact that he's a top contender for the award, and says he hasn't even thought about writing a speech in case he wins. When he first heard his name mentioned for the award he was floored.

He said he's been able to stay grounded despite his meteoric rise from fighting for the starting job in August to leading the Aggies to 10 wins this season because of a tight-knit group of friends.

"My friends do the best job of making sure that doesn't get to my head or anything like that," he said. "I think they're in love with more college football players than they even like me. They talk about Jeff Driskel or Braxton Miller or whoever it may be."

"They talk about those guys all the time and it makes me sit back and think: `Do y'all even like me?"' Manziel said with a laugh.