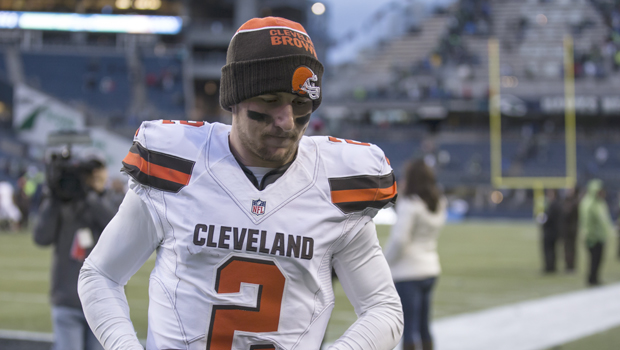 CLEVELAND -- Troubled Browns quarterback Johnny Manziel is being investigated by police in Texas following a disturbance during which he may have assaulted his ex-girlfriend.

Manziel, who has had two tumultuous seasons in the NFL, was identified by Forth Worth police after they were called at about 2 a.m. Saturday to investigate a report of a "possible assault" at an apartment complex. The officers didn't find the person who called, but they spoke to an unidentified 23-year-old woman who said she was "involved in a disturbance with her ex-boyfriend" earlier that night in Dallas.

Sgt. Steve Enright later identified him as Manziel. Enright told CBS News correspondent Omar Villafranca that Manziel had not been arrested. It was unclear if he had yet been questioned.

Police didn't say if the woman was hurt. An ambulance was called, but she was not taken to a hospital.

The police report said the woman was uncooperative with officers, who were unable to locate a crime scene. The woman raised concerns about her ex-boyfriend's well-being. Police tried calling Manziel's cell phone and searching for him before it determined he was safe.

Fort Worth police are working with Dallas police to determine if a crime occurred.

Beyond the legal matter, Manziel could face discipline from the league. NFL spokesman Greg Aiello said in an email the league is "aware and looking into it."

This is the second time Manziel has been questioned by police following an argument with a girlfriend.

In October, police in Avon, Ohio, received an emergency call after Manziel and Colleen Crowley were spotted fighting as they drove together near the quarterback's home on the west side of Cleveland. Manziel was not arrested but the matter prompted an NFL investigation to see if he violated the league's personal conduct policy.

Crowley had told police that Manziel hit her and pushed her head against a car window. The couple told police they had been drinking alcohol earlier in the day.

Manziel was later questioned by a league investigator and cleared, but it was another mark on his already tainted reputation.

Manziel started in six games this season, winning two of them, CBS affiliate WOIO reported. In those six games, Manziel threw for 1,500 yards and seven touchdowns, and adding five interceptions.

The 23-year-old player's latest off-field problem won't help his standing with the Browns, who seem to be distancing themselves from the 2012 Heisman Trophy winner from Texas A&M.

As of Friday, new coach Hue Jackson had not yet been in contact with Manziel. The Browns were disappointed when the second-year quarterback, who was taken with the No. 22 overall pick in the 2013 draft, missed a scheduled medical treatment on the final day of the season.

Manziel was in concussion protocol at the time, and although he was not required to be at the Browns' home finale against Pittsburgh, the team was not sure of his location as reports surfaced he was partying in Las Vegas. He was fined for not reporting to the team's facility on Jan. 3.

Earlier this week, Browns owner Jimmy Haslam said he thought Manziel's relationship with the team could be saved but his behavior may force the team to release or trade him.

"I think Johnny made progress on the field last year. I think that's undeniable," Haslam said Thursday night. "We have a certain expectation for our players and that includes Johnny, and he's got to live up to those expectations."

If they want to release Manziel, the earliest they can do so is Feb. 8, the day after the Super Bowl, when the NFL's waiver system begins. Teams can't make trades until the new league year begins on March 9.