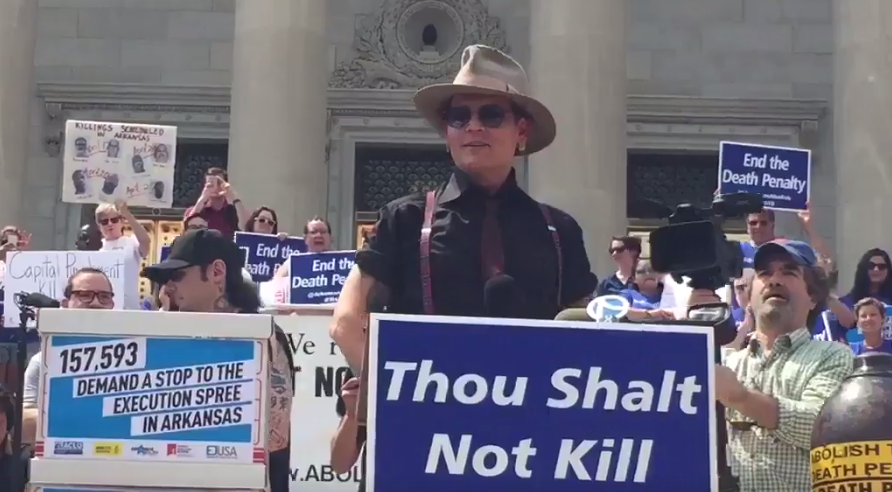 Death-penalty opponents gathered Friday on the front steps of the Arkansas Capitol to protest the state’s plan to execute seven inmates before the end of the month. The state’s supply of supply of midazolam, a sedative used in lethal injections, expires on April 30, and the drug’s manufacturer won’t sell it for executions after that date.

Actor Johnny Depp appeared alongside Damien Echols, who spent nearly 18 years on Arkansas’ death row before he was freed in 2011 in a plea deal in which he maintained his innocence. Depp was among several celebrities who lobbied for the release of Echols and the two other men convicted in the “West Memphis Three” case.

Depp spoke at the rally, where he cited Echols’ case as reason enough to halt the executions. “Arkansas almost put an innocent man to death. I don’t believe that possibility should ever happen again,” he said.

The Arkansas Coalition to Abolish the Death Penalty’s Friday rally comes as a federal judge weighs whether to grant the inmates’ requests to block their upcoming executions. Lawyers for the inmates argue that the rushed schedule of executions is cruel and unusual punishment.

In addition, two pharmaceutical companies filed a court brief on Thursday seeking to halt the executions, and medical supply company McKesson said it sold Arkansas one drug believing it would be used for medical purposes -- not executions. McKesson said it’s considering “all possible means” to get the drug back, including legal action.

Griffen’s order effectively halts the executions, which had dropped to six after Friday’s state Supreme Court order blocking one execution and a federal judge halting another last week, unless it’s reversed or the state finds a new supply of the drug.

All seven men the state wants to execute are convicted murderers.