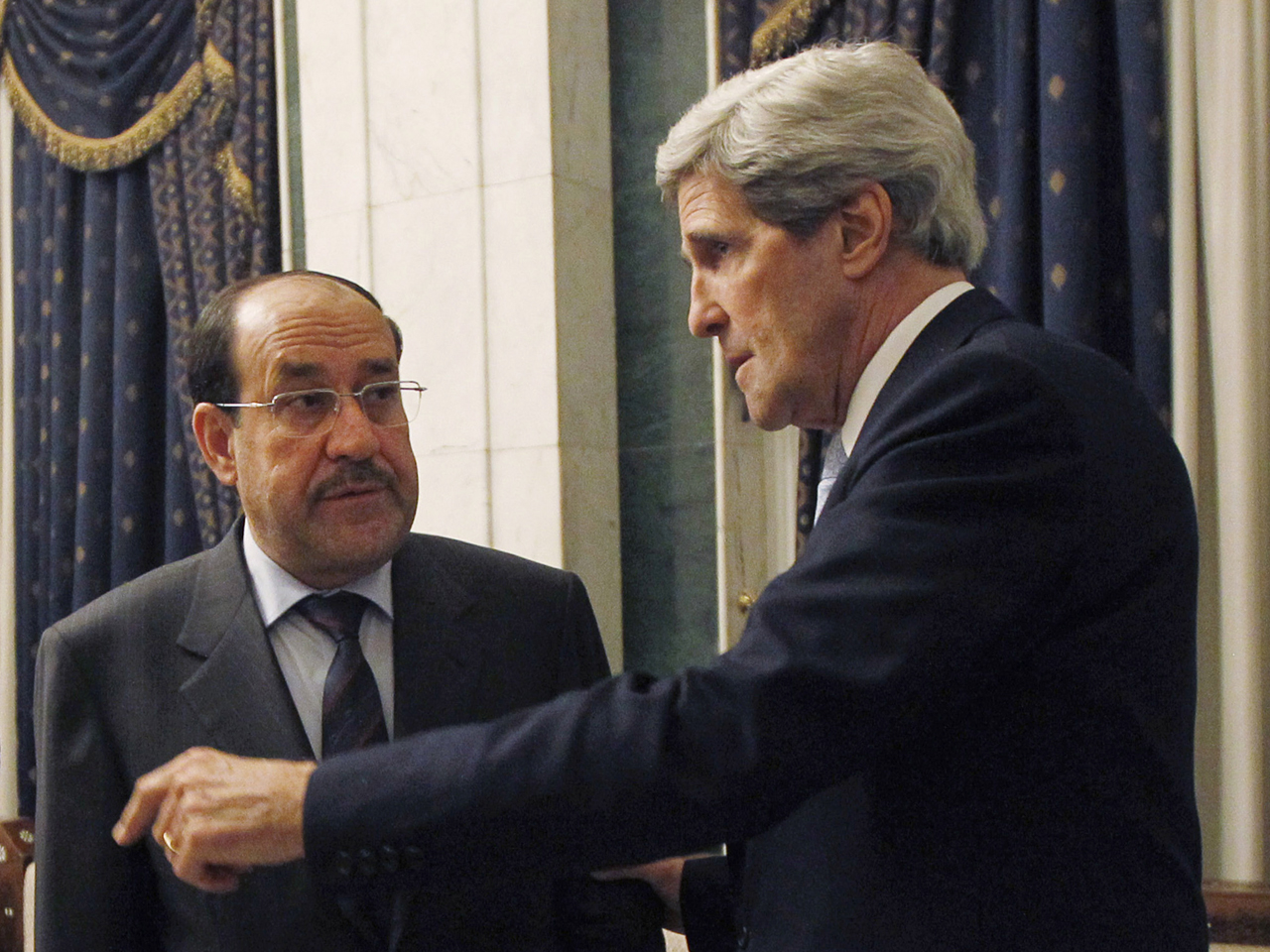 BAGHDAD The U.S. has made clear that Iraq shouldn't allow Iran to use its airspace to ship weapons and fighters to Syria, U.S. Secretary of State John Kerry told reporters Sunday during an unannounced trip to Baghdad.

"I made it very clear that for those of us who are engaged in an effort to see President Assad step down ... anything that supports President Assad is problematic," Kerry said.

Kerry also said that U.S. lawmakers and the American people are "increasingly watching what Iraq is doing and wondering how it is a partner."

In the absence of a complete ban on flights, the U.S. would at least like the planes to land and be inspected in Iraq to ensure that they are carrying humanitarian supplies. Former Secretary of State Hillary Rodham Clinton secured a pledge from Iraq to inspect the flights last year, but since then only two aircraft have been checked by Iraqi authorities, according to U.S. officials.

The overflights have long been a source of contention between the U.S. and Iraq and Kerry will tell the Iraqis that allowing them to continue will make the situation in Syria worse and ultimately threaten Iraq's stability.

One senior U.S. official said the sheer number of overflights, which occur "close to daily," along with shipments trucked to Syria from Iran through Iraq, was inconsistent with claims they are only carrying humanitarian supplies. The official said it was in Iraq's interest to prevent the situation in Syria from deteriorating further, particularly as there are fears that al Qaeda-linked extremists may gain a foothold in the country as the Assad regime falters.

The official, who spoke on condition of anonymity because she was not authorized to publicly preview Kerry's meetings, said there are clear links between al Qaeda linked extremists operating in Syria and militants who are also carrying out terrorist attacks in Iraqi territory with increasing regularity.

A group of fighters in Syria known as Jabhat al-Nusra, a powerful offshoot of al Qaeda in Iraq that the U.S. has designated a terrorist organization, has claimed responsibility for most of the deadliest suicide bombings against regime and military facilities and, as a result, has gained popularity among some rebels.

Kerry will tell al-Maliki, a Shiite with close ties to Iran, that Iraq cannot be part of the political discussion about Syria's future until it clamps down on the Iranian shipments, the senior official said.

Maliki has long-standing relationships with Iranian and Syrian officials from his time as Shia dissident. He built those relationships during the late 1970s in an effort to get their help to overthrow Saddam Hussein. Since Maliki became Prime Minister, those ties have proved useful to maintain his own hold on power. However, they are problematic for the U.S. and its efforts to isolate Iran and cut off the regime of Syria's Assad.

As Iraq approaches provincial elections next month, Kerry will also stress the importance of ensuring that all elements of society feel enfranchised, the official said. A recent decision to delay the polls in Anbar and Nineveh provinces is a "serious setback" to Iraq's democratic institutions and should be revisited, the official said.

In addition to al-Maliki, Kerry saw Iraqi parliament speaker parliament speaker Osama al-Nujaifi, a Sunni, whose faction is at odds with Maliki's Shiia. Kerry also spoke by phone with Massoud Barzani, the head of the Kurdish Regional Government based in Irbil to encourage the Kurds not go ahead with unilateral actions — especially involving oil, like a pipeline deal with Turkey.

He will stress the "importance of maintaining the unity of Iraq," say that "separate efforts undercut the unity of the country" and that "the Kurdish republic cannot survive financially without the support of Baghdad," the official said.

Kerry's arrival came just three days after the anniversary of the U.S.-led war that began on March 20, 2003, with an airstrike on Dora Farms in southern Baghdad in a failed attempt to kill Hussein.

The invasion and toppling of Hussein sparked years of bloodshed as Sunni and Shiite militants battled U.S. forces and each other, leaving nearly 4,500 U.S. soldiers and more than 100,000 Iraqis dead.

Violence has ebbed sharply since the peak of Sunni-Shiite fighting that pushed the country to the brink of civil war in 2006 and 2007. But insurgents are still able to stage high-profile attacks, and sectarian and ethnic rivalries remain threats to the country's long-term stability.

Earlier this week, an al Qaeda in Iraq front group claimed responsibility nearly 20 attacks that killed 65 people across the country on Tuesday and Wednesday.

The Islamic State of Iraq said it unleashed the car bombs and other explosions to avenge the executions and "massacres" of convicted Sunni inmates held in Iraqi prisons. Its claim came on the 10th anniversary of the start of the war, although it made no reference to the significance of the date.

Kerry arrived in Baghdad from Amman, where he had been accompanying President Barack Obama on his tour of Israel, the Palestinian Authority and Jordan. His visit to Iraq is the first by a U.S. secretary of state since Clinton went in April 2009. During Obama's first term, the Iraq portfolio was largely delegated to Vice President Joe Biden.

Since Clinton's trip, the American diplomatic presence in Iraq has shrunk dramatically, most significantly since U.S. ended military operations in late 2011, according to officials. A year ago, there were 16,000 State Department employees and contractors in the country. As of Kerry's visit, that number had declined to 10,500 and it will drop to 5,100 by the end of 2013, officials said.