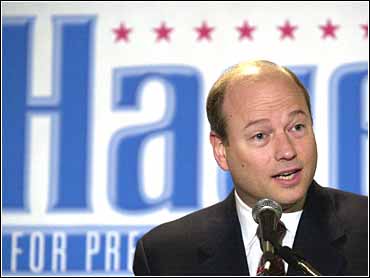 Natural Law Party founder and a Reform Party candidate John Hagelin has the answers to your questions. Who is he, and why he is running? Veteran CBS News White House Correspondent Bill Plante brings a top political expert into the Smoke-Filled Room each week to answer your questions.

Plante: Our first viewer Allen Smith writes "If no Reform or Independent nominee gets invited to the debates, do you think the established 'third-parties' should or will put on a separate debate forum to be picked up by one of the networks?

Hagelin: Of course we will debate separately, even if we're not included in the Republican and Democratic debates. We've done that in previous elections. But it's really not enough. The Debates Commission is illegally barring third parties from participation. Illegally because the debates commission is a not-for-profit, and therefore by law, a non-partisan organization. But of course, its behavior is highly partisan. It has erected a set of barriers to participation in the debates process that has been specifically engineered to keep third parties out. And that is the sole purpose of those criteria. That is really partisan behavior and the non-profit status of the Debates Commission should be yanked by the F.E.C. I've got a court case with four years of standing with which we've been promised almost an immediate response. And that would make these criteria illegal, and bring third party candidates into the process.

Plante: What do you think your chances are of getting the Reform Party nomination? Pat Buchanan seems to have co-opted the party for himself, getting anyone who disagrees with him thrown out. And, he refuses to even debate you for the nomination. Nancy W. is curious.

Hagelin: Pat Buchanan has been trying to co-opt the party and turn it into a platform for a right wing social agenda. And that is why his campaign is imploding within the party. He has alienated most of the party and in this crucial primary process that is taking place now, I have gained the edge. I have the endorsement of the leadership of New York state, Colorado, California. These are the states in which the vast majority of Reform Party members and registered voters live. Actually at this point I have the edge, and expect to go into the convention in August as its Presidential nominee.

Plante: "How do you propose to implement some type of campaign finance reform?" asks Mark.

Hageline: Campaign finance reform is crucial. It's one of the hallmarks of my campaign. Just as PACs were created by a stroke of the pen during the Watergate era - which had formerly been called bribes - they can be eliminated by a stroke of the pen. That's one of my first acts as President in January of 2001. Once we eliminate PACs, which are direct bribes to congressmen, all of a sudden we'll have 535 public servants on Capitol Hill again, and not servers of special interests. As soon as our congressmen have to look back to us, the voters, for their support when it comes time to run their re-election campaigns, then all of a sudden the congress will be accountable to us, and we will automatically see support for the sort of common sense solutions that I promote. Like preventative health care. Like renewable energy technologies that will wean our dependence upon foreign oils. Sustainable agriculture methods. Crime prevention. Educational innovations that work, and so on.

Plante: T.D.H. wants to know "What are your thoughts on capital punishment? Do you support the death penalty?"

Hagelin I have resisted the knee-jerk reaction from the Republican congress to expand the death penalty to include a large number of crimes. And at this point, given the fact that it appears we are currently unable to implement the death penalty in any sort of reliable or fair way, I'm proposing a moratorium on the death penalty until these difficulties can be sorted out.

Plante: "Many people haven’t even heard of the Natural Law Party, much less know what it stands for," notes M.C.F. She asks "How can you get your message out to more people?"

Hagelin: The Internet is a critical new avenue for us to talk directly to the American votes in a really grass-roots way. The Internet is a great equalizer. The Natural Law Party and the Reform Party are beginning to take great advantage of this means of communicating directly with the voter. Plus, by building a powerful coalition of America's third parties, linking the Reform Party and the Natural Law Party, we're really beginning to break through to the mainstream media.

Plante: The high cost of health care is an ssue for many Americans. What would you do to lower the costs and make coverage more affordable for more people? B. Smith is curious.

Hagelin: We can cut the costs of health care and promote the health of the nation enormously by shifting our disease care system towards a health care system. According to Congress’ own statistics 70% of disease and $700 billion in annual medical costs are easily preventable through prenatal care, and proven preventative medicine. I would provide coverage for any verifiably effective, and cost effective, preventative intervention that would prevent disease, promote health and save money in the best possible way - by keeping people healthy.

Plante: "I've read your party's platform on the web. Do you really think Transcendental Meditation is the answer for all the country’s problems? You say it's been scientifically proven to work - how is this so?" asks Sandy M.

Hagelin: I don't think this viewer has actually read my platform. I would recommend that they read
www.hagelin.org. As a scientist I support a broad-based platform of common sense solutions with the overwhelming support of the American people. By proven preventative health care that can prevent disease, promote health and cut $700 billion in annual medical costs. I've been working with the Congress for years on solutions in health care, crime prevention and the environment. I'm not sure why the viewer is placing so much emphasis on Transcendental Meditation.

Plante: "What qualities will you be looking for in a Vice President?" asks our final viewer Molly

Hagelin: I would choose my Vice Presidential running mate on the basis of their integrity and their actual capability. Not on the basis of whether they are a politician or another lawyer, but just on the basis of an individual who has demonstrated great success in their own careers and is in touch with solutions that are working in health care, in education, in agriculture, and in foreign policy - to bring as much experience to the ticket as possible.